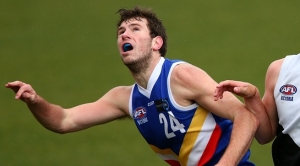 Lock-down tall defenders aren’t often the most talked-about prospects come draft time, but Jack Maibaum’s achievements for the Eastern Ranges and Vic Metro in 2016 have forced his name into the limelight.

The 193cm Knox product was named in key defensive posts in both the TAC Cup Team of the Year and U18 All Australian team to present himself as one of the draft’s stingiest backmen.

taccup.com.au talked to Maibaum at the recent NAB AFL Draft Combine, where he recorded the second-best time in the agility test and the equal-third-best score in the clean hands test.

How have you been selling yourself as a footballer to AFL clubs in interviews at the Combine?

“Probably my greatest strength is my competitiveness – that allows me to defeat opponents on the field. Especially being a key backman taking on the best forwards, I think that helps me a lot.”

What is the strangest question you’ve been asked by an AFL club?

“Probably (what is) 330-something divided by three.”

Which AFL players do you particularly like to watch and model your game on?

“(Richmond’s) Alex Rance or (Adelaide’s) Daniel Talia – they’re probably the two best key defenders in the competition, so if you can play anything like them you’re doing something right.”

How do you think your year turned out relative to your pre-season expectations?

“I think it’s exceeded my expectations. I came in and just wanted to play well in the TAC Cup and hopefully make the Vic Metro squad. I ended up making Vic Metro, we won the national championships and I found myself in the All Australian team. That was beyond what I thought (would happen).”

What did you learn from your experience of playing in Eastern’s losing Grand Final team last year?

“We were pretty motivated over the pre-season by that. Obviously we didn’t have the finish we would have liked this year – going down to Sandringham by two points in the Elimination Final – but that definitely motivated us during the season.”

What do you think was your best performance of the year individually?

“I’d have to say the Allies game at Etihad Stadium for Vic Metro (in the U18 Championships). I played on (Murray’s) Todd Marshall – one of the most highly-touted forwards going around – and I did a pretty good job on him (Marshall had six disposals, no marks and kicked one goal in Metro’s win).”

Which opponents caught your eye or were particularly difficult to play on this year?

“(Oakleigh’s) Patty Kerr in the (NAB AFL U18) All Stars game (on the Friday before the AFL Grand Final) – he’s a lot to handle.”

Talk about why you think your teammates at the Combine are so highly rated.

- Josh Begley: “He’s just a brickhouse. He runs through people, can play forward and kick goals or get the ball in the midfield.”
- Dylan Clarke: “He’s just competitive. He wins the ball inside and gets it going on the outside.”
- Jordan Gallucci: “He’s just got the X-factor. He’s quick, he can jump and does the amazing things.”
- Callum Brown: “He’s got a mix of all three of them (Begley, Clarke and Gallucci). He does it all.”

If you weren’t possibly going to become a full-time footballer, what would you be doing in life in the next few years?

“Probably go to uni or get a trade, I’m not too sure.”

Who’s your tip for the no.1 NAB AFL Draft pick?