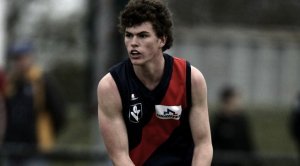 It is not ever day a former Peter Jackson VFL player takes out the Triple J Hottest 100. In fact it has never happened until now.

On Australia Day, as the youth station counted down from 100 to 1, former Coburg player James Keogh – AKA Vance Joy – came out on top with his ukulele driven track ‘Riptide’.

With nearly 1.5 million votes counted, ‘Riptide’ was his second track in the 2013 countdown, with ‘Play with fire’ coming in at number 95. It was the first time a number one song came from an artist who is yet to release a full length album, with Keogh only having released an EP 'God Loves You When You're Dancing'.

Those unfamiliar with the track may have heard it as part of the Medibank Private ad campaign in 2013.

Keogh played 28 games for Coburg between 2008-2009, and was overwhelmed by his feat when he spoke to Triple J after he was announced at number one.

"It came together at the start of last year, and I went into the studio with my drummer last year, and we paid for a day of studio time and we came out with the song basically as you hear it now. It's just crazy how far it's come."

It completed a big year for Keogh, who was also nominated for Song of the Year at the ARIA Awards.