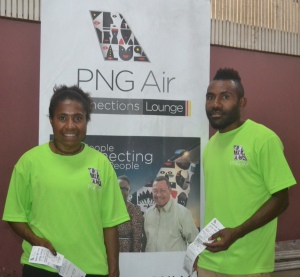 Simbu distance runners Siune Kagl and Mary Tenge who were both medallists at the 2019 Pacific Games in Apia have relocated to East New Britain to join National Coach Bernard Manau at Utmei Secondary School.They have been joined by young team mate Monica Kalua, and fellow Duke of York Islander Israel Takap who just missed out on a place in the team for the Games. With future Games in mind Athletics PNG stepped in to assist Kagl and Tenge after hearing about the uncertainty they were facing with continuing their education at home in Simbu. “We thought it made a lot of sense to have these four athletes training together with Coach Bernard Manau said President Tony Green. “ Helping to get athletes into a good training environment is all part of our planning process for future Games, and East New Britain has an inter high school athletics programme that is probably the best in the country. Having the athletes in a remote location away from the distractions of town/city life also gives them every opportunity to do well in their studies.”

Green thanked major sponsor PNG Air for providing free air travel from Lae to Rabaul for Kagl and Tenge. He said Athletics PNG was happy to assist the athletes as both had demonstrated their value to the team through their hard work and commitment last year.Kagl won a silver medal at the Games in the 10000m and was fourth in the 5000m after posting a number of consistently good performances in both events. Tenge placed second in both 5000m and the 3000m steeplechase , with Poro Gahekave winning gold in both events.