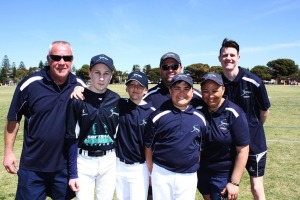 Softball Victoria’s Junior Academy and Development teams have completed another successful weekend at the annual Labour Day Tournament in Adelaide.

More than 100 junior softball athletes from all over Victoria travelled to South Australia to put into effect all the lessons learned and skills developed over the five-month Junior Academy and Development program, which has been facilitated by head coaches, Tony Black and Belinda Ainslie.

From the nine Victorian teams that took to the diamond over the past weekend, two teams came away with winner’s titles, one finished with a runner-up placing and a further four rounded out the podiums in their respective competitions in third place.

See below for a recap of how each Victorian team fared:

The Under 17 Academy Girls team began their Labour Day Tournament on Friday night with a win over Port Adelaide. Saturday saw the team record two wins and one loss, before backing up on Sunday with one win from their three games.

Heading into the final day on Monday, the Under 17 Academy Girls team were placed third overall and were set to play Sturt Blue for a place in the grand final. The Vics drew 4-4, but with Sturt placed higher on the ladder, they advanced to the grand final.

The Under 17 Academy Girls completed their campaign with a win over the Seacombe Tigers, resulting in a third placed finish overall.

The Vipers kicked off their Labour Day Tournament with a victory over the other SV Academy team in the competition, the Scorpions. On Saturday, the Vipers split their results with one win and one loss, before rebounding off a tough loss on Sunday morning to win their next two games later in the day.

The Vipers progressed to the Grand Final with a victory over Hills Blue in the Preliminary Final on Monday morning, but unfortunately went down in a nail biting encounter with Hills Green, 9-11, in the decider. Nonetheless, the the Vipers team and their coaches can be proud of their efforts with a runner-up placing.

The Scorpions were impressive throughout the 2018 Labour Day tournament, with a versatile team effort allowing them to take home a placing in the competition’s top three.

Over the course of the weekend, the Scorpions great pitching and catching combinations came together along with some sharp fielding to see the team land a spot in the playoff for third place.

In the playoff, the Scorpions’ superb batting and sharp fielding shone as they secured a third place finish, and simultaneously highlighted their growth as athletes throughout the weekend and across the entire SV Development program.

The Strikers finished sixth in the Under 15 age group; a fantastic effort considering the team was predominantly made up of Under 13s playing an age group above.

Along with the lessons and skills learned as part of the SV Academy program, experience the team gained from playing in the Labour Day Tournament against older players will be invaluable for the players in future years.

Emmy Horman proved to be a wonderful leader for the Strikers throughout the competition and was accordingly named as the team’s MVP for the tournament.

The Aces enjoyed a strong tournament over the course of the Labour Day weekend, and managed to put together enough impressive performances to book themselves a clash with Sturt for an opportunity to reach the final.

Unfortunately, the Aces couldn’t quite do enough to join their fellow SV Academy team, the Diamonds, in the final, but all can be pleased with their efforts in finishing in third place. Amongst all the good individual performers over the four days, Keeley McKinley was selected as the Aces’ MVP for the tournament.

The Diamonds began their Labour Day Tournament campaign in the best possible fashion with a 7-4 victory against fellow SV Academy team, the Aces. Over the course of the weekend, the Diamonds had many great contributors across all facets and did enough to advance to the final against Sturt Falcons on Monday afternoon.

In a hard-fought affair, the Diamonds secured the Labour Day Tournament trophy with a 4-1 victory – a wonderful reward for the efforts put in by the players, coaches and support staff throughout the SV Academy Program in recent months.

After impressing with her batting efforts throughout the tournament which included a number of homeruns, Karri Pritchard was named as the Diamonds’ MVP.

The Lightning became the second SV Academy/Development team to take home the top prize at the 2018 Labour Day Tournament on Monday afternoon.

The Lightning went through the tournament undefeated, but perhaps what was more impressive was the maturity, respect and sportsmanship shown by each of the players across the weekend. The united culture of the team was best exemplified in the decider, where they defeated Hills 10-0 to cap off a wonderful campaign.

After getting off to a rough start, the Thunder side managed to turn their weekend around to take home fourth at the Labour Day Tournament.

Despite losing their first three matches, the Thunder found their groove against Sturt Navy to claim their first win of the tournament, 7-3, and set the wheels in motion for the rest of their weekend. They went on to defeat fellow SV Development Program team the Sapphires (18-6), Port Adelaide (12-4) and Sturt Blue (14-7) to secure a place in the playoffs, where they claimed fourth place overall.

Despite having a very young team competing in the 2018 competition, the Sapphires impressed with a highly competitive campaign.

Across the four days of competition, the inexperienced outfit surpassed all expectations results-wise to finish third; a wonderful effort considering the team contained just two top age players at Under 13 level and the youngest player being just 8-years-old.

Leading the Sapphires throughout the tournament was Abbie Berkerlman, who was named as the team’s MVP.

To view a full photo album from the 2018 Labour Day Tournament, click here.