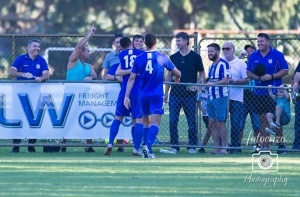 Floreat Athena moved to third spot on the NPL WA table with a deserved 2-0 win at Balcatta on Saturday.

The result was Balcatta's third game without a win, a run which has the one-time leaders now six points off top spot.

After a goalless first half Athena took the lead within a minute of the restart. A deep free-kick on the left from skipper Dean Evans found Chris Saldaris criminally unmarked and he sidefooted in on the volley from about six yards.

The outcome was still in the balance until the 87th minute, when Balcatta again failed to deal with a ball into the box. This time it was a throw-in from the right that caused the problem and it fell to Nicholas Ambrogio who shot into the gaping net to seal the points.

The outcome reflected the flow of the match, with Floreat sharper than their hosts. They had the best opportunity of the first half, too, when Calvin Whitney played in Ludovic Boi down the right. He cut inside and let fly with his left foot, bringing an acrobatic tip over from Balcatta keeper Yousri Gharsallah.