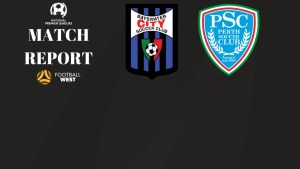 Leaders Perth SC continued their unbeaten start to the season with a 2-1 win over Bayswater City at Frank Drago Reserve on Saturday.

Gustavo Catarcione opened the scoring for Perth in the 21st minute before Gordon Smith equalised late in the first half.

However Michael Domfeh’s 68th minute goal proved the difference between the sides as the champions stretched the gap at the top to four points.

Dejan Aleksic started in goal for Perth, deputising for injured skipper Francis Soale, and made a good double save in the third minute against his former side.

The hosts thought they had taken the lead minutes later after Kenny Keogh steered Adam Tong’s wayward effort into the net, but Keogh was judged to have been offside.

Catarcione put the Azzurri ahead with a left-footed strike that looked to have taken a deflection on its way past Bayswater goalkeeper Devon Spence.

Giordano Colli’s inviting free-kick gifted Smith a free header, but Aleksic made a great reflex save to deny the Baysie attacker.

Smith had another chance in the 40th minute and this time found the back of the net with a clinical finish from a tight angle to equalise.

Catarcione was on top form and lead a counter attack for Perth before passing to Milenkovic on the wing, but Milenkovic’s brilliant cross was headed well over the bar by Domfeh.

Domfeh made up for his miss minutes later with a scrappy goal to put the visitors ahead.

City pushed forward and Smith probably should have equalised but he skied his shot from a meter out.

Tensions boiled over when the referee turned down penalty appeals from Bayswater, with coach Chris Coyne sent to the stands as his side succumbed to a 2-1 defeat.