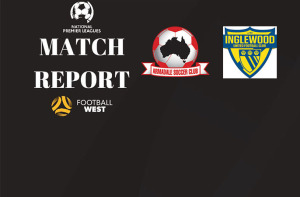 Inglewood United hung on for a 4-3 win over Armadale in a thrilling contest at Alfred Skeet Reserve.

Inglewood raced into a four-goal lead by half-time but by the end they were relieved to hear the final whistle after Armadale almost pulled off a stunning comeback.

Armadale had the better of the early play but the visitors had the clinical edge with Anthony Bafobusha and Chok Dau combining for three goals.

The first came when Dau latched onto a long ball to set up Bafobusha who stroked home with only the keeper to beat.

Dua made it 2-0 when he shimmied past his maker following some individual brilliance from Brian Farrell.

Armadale could not contain Inglewood and Farrell made it 3-0, bundling home from close range as the hosts failed to clear.

Dau and Bafobusha would combine once again before half time when Bafobusha met Dua’s deep cross with a volley into the bottom corner to give Inglewood a 4-0 lead at half time.

John O’Reilly’s half time team talk must have worked a treat as Armadale scored within five minutes of the restart when Harry Evans cut inside and powered his effort at the near post.

With their tails up Armadale made it 4-2 through substitute Sam Garces’ curled free kick and Inglewood’s lead was cut to just one when make shift striker Billy Quinncroft powered his far post header to send the home support wild.

Armadale pushed for an equaliser but although Jason Berrera was given his marching orders for violent conduct Inglewood clung on for all three points.