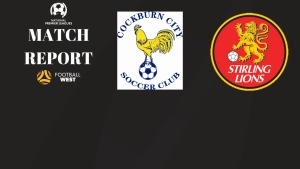 Cockburn City ended their six-game winless run with an impressive 5-1 victory over Stirling Lions at Dalmatinac Park on Saturday.

The Cockerels took the lead first through winger Ryan Pratt’s attempted cross to the far post that was tipped in by Lions goalkeeper Ryan Montgomery, but Ben Wantee equalised for the Lions not long after.

However the game remained level for only a minute as the home side again took the advantage when Daniel Robinson found the back of the net with an excellent, outside-of-the-boot half-volley.

Neither side exerted much control in the first half and at half time the game seemed there for the taking.

It was Cockburn however that found their rhythm in the second half and they scored three more goals to record their best performance of the season so far.

New Cockerels signing Hasani Sinclair came on for the second half and scored in the 49th minute with his first touch of the match, a powerful header from Cameron Edwards' free-kick.

Things went from bad to worse for Stirling in the 59th minute when Cockburn were awarded a penalty after Riley Woodcock was tackled from behind in the box and referee Julian Serra pointed to the spot. Robinson took the penalty and scored his second goal of the match with a nice finish into the bottom right past the diving Montgomery.

Stirling looked down and out after Robinson made it 4-1 as their early-season struggles continued despite getting their first win last week against ECU Joondalup.

Young substitute Adam Anfuso made it five for the Cockerels in the 90th minute after Luccas Mello played him through in the box.

Cockburn will hope to build on the result next week as they travel to Armadale while Stirling face a tough test on the road against Bayswater City.