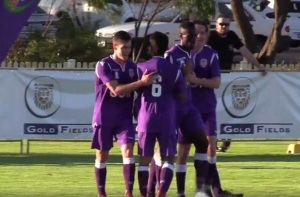 Two goals from Gomo Dukuly ensured Perth Glory enjoyed another day out in the Regional Cup as they put five past Sorrento in Busselton.

Saturday’s 5-2 result at Barnard Park was not as one-sided as the 6-1 drubbing dished out in Kalgoorlie in 2018 but in the end it was convincing enough for Richard Garcia’s men.

Gabriel Popovic put Glory’s noses in front and although Cameron Teece levelled for the Gulls, Perth were back in front before half time thanks to Henry Hore’s penalty.

Teece is having a strong start to the NPL WA campaign and he had the game in the balance again with his second goal 20 minutes from time.

But from that point Glory took charge, starting with substitute Dukuly’s strike from distance which made it 3-2.

The predatory Daniel Stynes finally gave Glory some breathing space and within a minute the wheels had come off for Sorrento as Dukuly completed the scoring in the latest entertaining encounter in the Regional Cup in front of a healthy crowd of over 700.