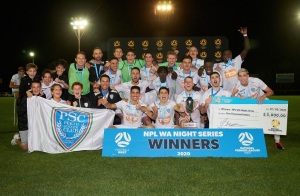 The 2021 Men’s NPL Night Series gets under way in just over three weeks with Floreat Athena chasing a fourth straight final spot.

Athena won the pre-season competition in 2018 and 2019, before losing to Perth SC in last year’s decider.

Both Athena and Perth are in Group B, with Floreat starting with a game against Armadale and the holders hosting Bayswater City.

The other Group B clash in Round One sees Sorrento take on Balcatta.

The group matches will take place over five rounds, with the top two sides from each group advancing to the semi-finals.