Army on the front foot with latest win 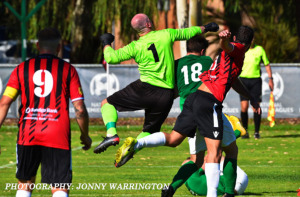 The home side made the most of their chances in a scrappy encounter with Adriano Jelenovic grabbing two goals.

Armadale are the only team with a 100 per cent record after two rounds, while Rockingham have started life in the NPL with two heavy losses and are yet to score.

The home side took the lead when Sam Garces crept into the box and coolly volleyed home 10 minutes before half-time.

Rockingham had a chance to equalise before half time when referee Matt Southern awarded a penalty after James Harmer had been brought down in the box by Armadale keeper Sam Hutchings.

But Hutchings made amends with a pair of fantastic saves to deny Harmer from the spot and his follow up.

Rockingham started the second half the better but couldn’t get beyond Billy Quinncroft and Nathan Costello marshalling the Armadale defence.

And just as Rockingham were developing a spell of pressure Armadale scored the second.

Dannie Richman won the ball high up the pitch and played in Jelenovic, who kept his composure and slotted past ex-Armadale keeper Cyrill Sharrock.

Rockingham pushed for a goal with Victor Brauner looking lively and Harmer hitting the post.

But Jelenovic put the game beyond doubt when Rockingham were caught with too many men up field. He rounded Sharrock to score and sent Armadale top of the league to the delight of the home faithful.