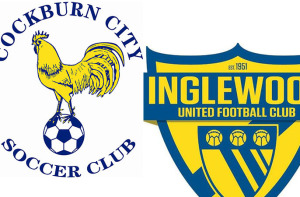 Cockburn City and Inglewood United produced a thrilling 4-4 draw at Dalmatinac Park on Saturday in Round Two of the NPL WA.

Hamza Hina netted twice, including Inglewood's equaliser deep into added time, while Daniel Robinson bagged a hat-trick for Cockburn in an end-to-end encounter.

The floodgates were opened after only five minutes when Hina was allowed space on the edge of the box and he made the Cockburn defence pay with a clean strike past Luke Radonich.

But the home side responded just two minutes later as Robinson put away his spot kick following Jamie Murphy's foul inside the box.

Robinson was again clinical in the 23rd minute after he found himself in the right place at the right time to slot home from a corner.

Just after the break Cockburn went 3-1 up when Ryan Pratt was rewarded for his pressure on keeper Alex Dunn, who cleared it straight into Pratt and could only watch as the ball rolled over the line.

Inglewood got back into the contest after 60 minutes after Sam Riak  tapped home from close range.

Hina thought he had completed the comeback only to see his header rebound off the post along with the follow-up effort. But the equaliser did arrive in the 83rd minute when Chok Dau was played through and he Radonich and scored into an empty net.


Neither side settled for the point and it looked as if Cockburn had done enough when Robinson put away his second penalty to complete his hat-trick in the 89th minute after being brought down in the box by Scott Blackmore.

Hina had other ideas, however, and in the seventh minute of added time he netted a stunning goal to spark wild celebrations.