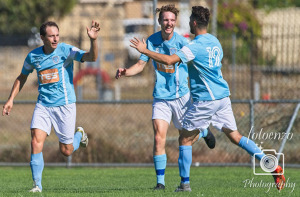 Perth SC were too slick for Stirling Lions. Photo by FotoEnzo

After being held to a 2-2 draw at home by ECU Joondalup in their season opener last week, Perth flexed their championship muscles – scoring two goals in the opening 25 minutes to set up the win.

This was the first of two "DT38 Australia" matches this season between the sides to remember the late Dylan Tombides, who played for both clubs as a junior, and help raise awareness of testicular cancer. Representatives of the DT38 Australia charity were at the match and a minute's applause was scheduled for the 38th minute, the shirt number Dylan wore at West Ham United.

Perth got off to a fast start with Paul Zimarino going close within the opening 60 seconds.

The visitors weren’t going to be kept at bay for long, however, and hit the front when Gustavo Catarcione beat the offside trap before rounding Stirling goalkeeper Ryan Montgomery to tap into an empty net.

It was a lead the reigning champions would soon add to as Nicolo Sabatini’s thunderbolt of a free-kick nestled into the back of the net to make it 2-0 after just 25 minutes.

Playing with a sense of confidence Perth needed just eight minutes after the break to grab a third, Harley Orr converting from the penalty spot after Catarcione was brought down in the area.

Just three minutes later, Stirling were awarded a penalty of their own but Dean Cummings saw his spot-kick saved by Perth skipper Francis Soale.

Moses Kalau went close to grabbing a consolation goal for the hosts, but his curling effort quarter of an hour from time cannoned off the bar as Stirling suffered their second home loss in a row to start the new season.