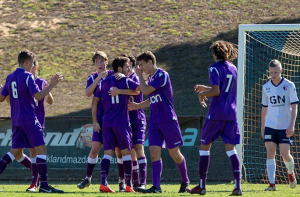 Perth Glory get their season up and running against Balcatta. Photo by Tom McCarthy

Perth Glory got their first win of the NPL WA campaign with a 3-0 defeat of Balcatta at E&D Litis Stadium on Saturday afternoon.

First half goals from Daniel Stynes and Jacob Italiano put the Glory in a commanding position, before an own goal from Balcatta’s Joseph Marino late in the second half put the result beyond doubt.

Balcatta will feel hard done by as they created some good chances, particularly in the second half, but were unable to make an impact on the scoreboard.

Glory coach Richard Garcia was pleased with how his side played at their home ground for 2019.

“A good performance by the team and it’s always nice to get the result on top of the performance,” he said.

Balcatta came out firing early in the match and had a chance to open the scoring when Adam Zimarino flicked the ball to Carmelo Giuffre in the box, but his effort was saved by Glory keeper Jackson Lee.

The visitors had another chance when some high pressing lead to a counter attack, but Calum O’Connell’s effort was straight at the keeper from a tight angle.

Perth grew into the match and opened the scoring when a brilliant cross by Henry Hore found Stynes, who coolly headed home from the middle of the box.

Hore continued to pull the strings in midfield and nearly had another assist, but Gabriel Popovic was judged to have been offside the goal was ruled out.

Italiano eventually doubled the home side’s advantage with an emphatic finish from inside the box.

Balcatta looked more offensive after the break and put the Perth Glory defence under constant pressure with long balls upfield.

The visitors’ best chance of the half came when Shubham Mokala went through on goal, but Lee made a good reflex save.

Perth had their resolute back three of Zayd Farah, Walter Scott, and Jacob Muir to thank for the result, with Garcia labelling his defence as “the backbone of the team”.

The misery was piled on Balcatta late in the half when Marino put the ball into his own net from Aiden Edwards’ pass across goal to make it 3-0.

Balcatta coach Goran Stajic thought the result was difficult to take given how his side performed.

“I’m really disappointed for the boys, that’s a tough one… it’s just one of those days, credit to Perth for keeping us goalless.”