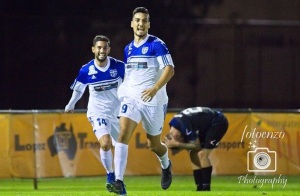 An own goal in the third minute of added time allowed Floreat Athena to escape with a 2-2 draw against Bayswater City at Frank Drago Reserve on Friday night and stretch their unbeaten league run to 11 matches.

Robert Petkov continued his fine form with an early strike for Floreat, before two second half goals from Daryl Nicol looked to have given Bayswater redress for their Night Series final loss to Athena earlier this month.

But Floreat have forgotten how to lose and their persistence paid off in the third minute of added time courtesy of the unfortunate Adam Tong.

It was all Floreat early on when after 11 minutes Petkov pounced on a loose ball inside the box for his second goal in as many matches.

Tong then saw his header flash just wide of the post for Bayswater but overall both teams struggled to create chances in the first half.

However, the second half was a different story and a diving header at the back post from Nicol put the home side on level terms after 60 minutes.

Referee Josh Mannella was forced to produce his yellow card as the push-and-shove that this fixture promised came to the fore.

But just as both sides looked to have run out of time Dennis Galan handed Bayswater a lifeline in the 85th minute when he fouled Jason Mirco inside the box and gave away a penalty.

Nicol gladly took penalty duties for the second week in a row and he confidently slid his shot straight down the middle and past Jason Saldaris.

Floreat weren’t giving up, however, and they got their reward in the 93rd minute when the ball was squared goalwards and bundled over the line via Tong.