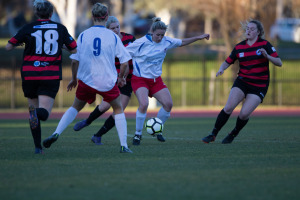 Having already clinched the Premiership and the Federation Cup on Wednesday night, Belconnen United will be on cruise control for the last three weeks as they look to reach the Grand Final with minimal injuries. Antoni Jagarinec’s side have already struggled with outs in recent weeks so he may look to play up a number of players here to help freshen up the squad ahead of finals. The first matchup between these two earlier this season finished in a 13-0 drubbing, but an improving Olympic closed the gap in the second match to only goal down two goals to nil.

Heavy losses to Canberra FC and Gungahlin United have Olympic reeling coming into this matchup, as they limp towards the end of a tough season. As much as they have conceded eight and nine goals in their past two match ups, this week’s visitors have scored twice both weeks, an area they have improved in throughout the season. While a win here is likely too big an ask for the bottom of the table side, it represents a chance to show off the progress that has been made this season.

Making ground on Canberra FC for second place will be the goal for Gungahlin United this weekend as they meet Tuggeranong at Kaleen Enclosed. Four points back but with a game in hand, a win here will contribute to setting up a monster last day of the season when they take on their rivals at GEO. A disciplined display last weekend saw United romp to a 9-2 win over Olympic, with the side clearly benefitting from the weekend of rest they had the round before. If Gungahlin remain fresh and fit heading into the finals then they can challenge anyone on their day, but they must avoid potential hurdles like the one this weekend if they are to make an impact.

Tuggeranong are out of the finals race but still have pride to play for, despite a big 5-0 loss to the Academy last weekend. It was an understrength side in that match and Michael Aldred’s side have had big problems with injuries throughout the campaign. A dangerous Gungahlin side is not the ideal opponent when dealing with injuries, but Tuggeranong have caused their fair share of boilovers this season and will still head in full of confidence.

Woden-Weston can make a charge for a shock top two berth on Sunday when they face second-placed Canberra FC. The Wanderers sit five points behind their opponents but can close that gap to two before the final two rounds with a win here. Both clashes between these sides this season have ended in draws, and both teams will be keen to win this tie-breaker of sorts. Diego Elmoudawar’s side come in from a three-match winning streak and have showed great form over the last few weeks despite often trotting out a very young side. A win here would be a strong statement of intent ahead of a big clash with Belconnen United next weekend.

Coming in off the back of a narrow loss at home to Belconnen United last weekend should have Canberra FC fired up for this clash. The hosts played well for large parts of that match but were unable to break down a disciplined Belconnen defence, and sometimes looked overworked in midfield without the presence of Chantel Jones. Jones played in goal last match despite a four-goal haul the week before, and put in a commanding performance in the box. This match could well depend on where Jones plays, as her presence in the middle of the park is crucial against a Woden-Weston side that do so much good work through there.

The Canberra United Academy will look to rebound from their Federation Cup Final loss midweek when they host a stumbling Monaro at Hawker in the late Sunday afternoon match. The Academy are likely to be at a reduced strength with a few key players out following a busy recent schedule, but will still be confident of a result here. A big win over Tuggeranong last week though kept them on track for a top two finish, with two games in hand on those around them. While the Academy don't play finals and could be forgiven for letting off come the end of the season, that is unlikely amongst a highly competitive group who will be eager to finish the season on a strong note.

For Monaro, a heavy loss to Woden-Weston last weekend came on the back of a number of defensive errors that their opponents capitalised on, and they cannot afford the same here against the pacey Academy side. Angelo Maralit's side are all but locked into finish second last barring a miraculous turnaround from Canberra Olympic, but will still be looking for positive results to end the season on. If the Academy are fatigued then Monaro's dangerous forward line will be poised to take advantage of them, but ensuring that they remain locked in up the other end will likely be the Panthers' biggest challenge.