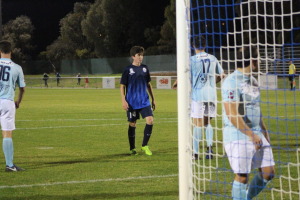 The FFA Centre of Excellence will play their final NPL match on Saturday when they host Belconnen United at the AIS. The winner will finish outright second, but with Belconnen already having a spot in the major semi-final sewn up, barring a catastrophic loss and big win from Canberra FC, they may take it easy in this matchup. Dean Ugrinic will want to be careful that his players do not risk injury or suspension from this match ahead of a likely meetup with Premiers Canberra Olympic. United came out on top in a fiery fixture against Tigers last weekend that saw them pick up six individual yellow cards, and avoiding a repeat will be crucial. United are good enough to win a matchup that they lost in stoppage time the last time out, but how hard they push will determine it.

Their young opponents will no doubt come out of the blocks with intent, given they have a point to prove ahead of the closure of their program. An enormous 12-0 win two weeks ago over the Rhinos gave an indicator of how they plan to finish the season, and they can still claim outright second with a win here. Their entertaining, fast-paced style of play has won them plenty of fans this season and they have remained consistently one of the two best sides in the competition. A win here would be fitting but it will be tough against a Belconnen side that has finally just about reached full strength right in time for a run deep into finals.

Must-win. That summarises this match for Tuggeranong as they head into the final round three points outside of finals. A win for them and then a loss for Gungahlin will put them back into finals for the first time in years, but they will be challenged by an improving Monaro side. A diabolical first half last weekend saw them enter the break four goals down against Canberra Olympic, and they must ensure that a similar start is not repeated. Fernando will prove to be a focal point once more and can draw defenders to allow space for his teammates, but will no doubt have chances of his own to score too against the second worst defence in the league.

For the Panthers, they were less than ten minutes from their first win of the season last weekend before Elie Darwich ended those hopes with a delightful set piece. The Panthers went behind early but showed fight to get back into the match, and will be raring to find a win in their final outing. Whether that desire is enough to get them over the line against a side that brushed them off quite comfortably in their matchup earlier in the year remains to be seen. Lloyd Hewitt’s side have missed a consistent threat up front with just nine goals to their name, and have had ten games where they have failed to score at all.

The Riverina Rhinos will travel to Canberra for their final match of a disappointing season on Saturday to face Premiers Canberra Olympic. The Rhinos fell at home last weekend to Gungahlin and will likely have a light squad for this match given the troubles they have had with travelling in the back end of the season. The Rhinos have conceded a staggering sixteen goals in their last three matches including 12 in the one match to the Centre of Excellence, and will need to tighten up at the back as they face an Olympic attack that forced in four goals in the first half last weekend. The Riverina side and their supporters will be keen to put on a good showing in their final outing in Canberra, but they will find it tough against the league’s top side.

For Frank Cachia’s men a tumultuous week was put behind them as they blitzed Tuggeranong 4-0 at O’Connor, including two own goals from the visitors. Olympic are hitting their stride as they head towards a likely major semi-final matchup with Belconnen United next weekend, and can rest key players this weekend. Stephen Domenici has one hand on the Golden Boot with a five-goal lead to Jason Ugrinic, while a couple of defenders are flirting with card trouble ahead of finals. Olympic have the depth in their squad to rest players without sacrificing too much quality, but keeping momentum and cohesion is also important going into a finals matchup. A tidy win with no injury issues or suspensions will be the dream for Cachia, but whether or not that plays out against a plucky Rhinos side remains to be seen.

Gungahlin United will have a keen eye on Saturday’s fixture between Monaro and Tuggeranong United before they turn their attention to their matchup with Canberra FC. A win for Tuggeranong means a point will suffice for Gungahlin, but they will be hoping an improving Monaro side can do them a favour early. United won this match at Deakin earlier in the season as they upset the hosts who have struggled through the back half of the season. An important last win in Griffith last weekend came on the back of coming so close to knocking over Canberra Olympic the week before, and United will approach this game with confidence. They need to be wary though of an opponent who have already qualified for finals, and ensure they are not caught out if they decide to go for a draw.

Their visitors started the season in absolutely hot form, but after picking up 19 points through the first half of the season, they have just 12 to show from the following eight matches. A big win over Tigers in Cooma two weeks ago was their first win over finals-calibre opposition since their last match with Tigers, and this weekend will be a good barometer of where they are at before they enter finals. Julian Borgna and Niko Kalfas, both arrivals in the mid-season transfer window will be key both in this match and in the finals, as well as former A-League forward Kofi Danning, who has showed his potential with flashes of brilliance this season. The best part of this match for Marko Vrkic is that his side can go into this match care-free about the result, but must ensure they remain disciplined throughout.

Tigers FC & Woden-Weston will both just be looking to finish their season on a strong note when they meet in Cooma this weekend. Tigers had their finals hopes ended by Matt Grbesa’s second-half goal for Belconnen last weekend, and a win would be a good way to finish off the campaign. When Tigers visited Woden Park earlier in the season they faced a much improved Woden-Weston side who pushed them for large parts of the game, but this time face a side who have not won in the last five weeks. Thomas James was the main danger for Tigers up front but too often looked isolated, while Daniel Nicoletti looked promising on his first grade debut and may well earn another go here. Injuries troubled Tigers from the beginning last weekend and Gaby Wilk will likely have changes to make to the squad that takes the field.

Their visitors meanwhile struck late last week to rescue a point against Monaro, a side that they had previously beaten 5-0 this season. Tony Olivera’s side have struggled with injuries and unavailability throughout the season, but had a patch through the middle where they won four of their five matches before regressing into the back end of the season. This match gives Olivera a chance to try some new ideas ahead of next season, as well as giving youngsters a chance at first grade. Their 4-2 loss to Tigers mentioned earlier was at the beginning of that form patch, and if the Wanderers can bring a similar intensity to the table as they did in that match then they stand a good chance of bringing points back to Canberra.