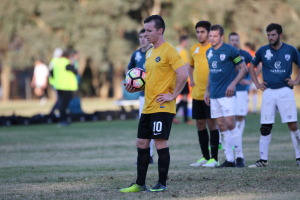 A trip away to a struggling Riverina side this weekend will give Gungahlin United the perfect chance to firm up their finals chances. United missed a chance to outright claim the fourth spot in the finals when their 3-1 lead over Canberra Olympic disappeared in the final ten minutes, but can jump Tuggeranong United before their match against Olympic on Sunday afternoon. After a heavy loss to Tigers three weeks ago United rebounded strongly against the CoE and then Olympic, and will hope to take that form into this weekend. Anything less than a win would put them right on the back foot ahead of a huge matchup with Canberra FC next Sunday afternoon.

The Rhinos were pumped 12-0 at the AIS last weekend on their second last trip to Canberra, and have a rough finish to the season with Gungahlin this weekend before facing Canberra Olympic in the final round. After a brief period of the season where it appeared the Rhinos were improving they began to struggle again, particularly on the road with issues of players not travelling with the team. The majority of the Rhinos goals have come at home where they appear to be stronger, often having improved results against teams in Griffith rather than their Canberra trips. They will be hoping the same rule of thumb applies here, after a 3-0 loss to United in Canberra in Round 8.

Woden-Weston will look to bounce back from a heavy loss to Tuggeranong last weekend when they host Monaro Panthers at Woden Park on Saturday afternoon. Tony Olivera’s side started well against Tuggies but dropped off in the second half as the hosts put three goals on them. The last time these two sides met was when the Wanderers turned the corner into the second half of the season, with a thumping 5-0 win over the Panthers. A repeat of that would help with ending the season on a strong note ahead of a road clash with Tigers in Cooma in the final week.

For the Panthers it is just another weekend closer to the end of the season, as their disappointing year peters out. They have two chances left to grab a win, against a side that beat them 5-0 and one that beat them 3-1, Tuggeranong next week. How much motivation this side has left is a question to be asked, having conceded 11 goals in their past two matches and still only scored seven times this season. A point this weekend is not out of reach, however they will need to lift from their last few weeks, where uninspiring performances and a lack of drive on the pitch have clearly been reflected on the scoreboard.

It’s the last chance saloon for Tigers FC this weekend, arguably needing a win to stay alive in the race for the finals. If Tigers fail to win and either of Gungahlin or Tuggeranong pick up a win, then Tigers will be out of the race. A 5-1 defeat at home to Canberra FC last weekend was a bad result to pick up just weeks out from finals, with Julian Borgna doing the majority of the damage to his former side. Inconsistent form has plagued this side all year and this weekend they will be without Alan Gaston and Daniel Barac, who scored the side’s only goal last weekend. Thomas James has quietened down since moving from Canberra FC, but Tigers will be hoping their front man can have a repeat of the performance he had with his old side at McKellar in Round three.

The hosts are safe on the table from this weekend’s opponents, and if either Gungahlin or Tuggeranong are to drop points, then just one will suffice to secure United a spot in the final four. A win gives them a big help in pursuing a second chance spot in finals, ahead of a huge clash against the FFA Centre of Excellence next Saturday afternoon. Jason Ugrinic will be the danger man in this matchup after another strong outing last weekend, taking his tally to 20 goals for the season. United have also tightened up at the back however, conceding just five times in their last six matches but will be wary of the 3-0 defeat they suffered at the hands of Tigers in Cooma back in Round Eight.

Canberra FC can seal a finals spot this weekend with a win in this top four clash with the Centre of Excellence. The 5-1 demolition of Tigers FC in Cooma, orchestrated by Julian Borgna with a hat-trick has given them momentum heading into a tough fortnight of football, with a potentially massive clash with Gungahlin on the cards next weekend. Michael Mensah will again miss this match through suspension but the hosts coped without him in last weekend’s clash, and still lay claim to the best defense in the league apart from the CoE. Their last win at Deakin against a side in contention for finals was the 3-0 defeat of Tigers back in Round seven, but the period since includes key losses to Belconnen and Gungahlin. The last time these sides met saw Canberra FC give away a two-goal half-time lead as Mensah was sent off and the CoE came back for a 3-3 draw, and Marko Vrkic will hope for an early lead again, but to hold onto it too.

While the Centre of Excellence are not playing finals, they showed last weekend that they are doing more than just going through the motions to end the season, with a ruthless 12-0 beating of the Rhinos. And they are likely to come out firing this weekend against Canberra FC too, ensuring they make a statement before the program closes after next weekend. Five separate braces in last weekend’s match showed how threatening they are as an attacking setup, and the hosts here will need to be wary of where the goals can come from. This match is the first half of a tough end to the season for the youngsters, with a big clash with Belconnen next week possibly deciding who finishes second in the Premiership.

Tuggeranong United face a huge test this weekend in the context of finals when they take on Premiers Canberra Olympic at O’Connor Enclosed. A 4-1 win over Woden-Weston in the broadcast match last Saturday at Greenway threw them right back into the mix, and they currently sit tied with Gungahlin for the fourth finals spot. Electric forward Fernando Jorquera again provided the spark in that match, and he will prove a handful for an Olympic defence that may be without Tim Bobolas after he left their match against Gungahlin in the opening minutes. The win last weekend was a strong rebound from their defeat to Belconnen the week before, and Sean Murphy has taken this side a long way in the second half of the season. How they stack up against Olympic remains to be seen, but they will undoubtedly push them all the way as they chase a finals appearance.

For the Premiers, they must continue momentum into the back end of the season to remain fresh for finals. With two home matches to finish the season, welcoming Riverina next weekend, Frank Cachia’s men can make a strong statement before finals with wins in both. However, they will face tough competition here, and need to avoid going behind as they did last weekend. Giving away two penalties to United nearly cost them dearly in that match, and only a hat-trick from Golden Boot leader Stephen Domenici rescued a point for them. The last time these sides met Olympic ran away with a strong start after a missed penalty from United, and Cachia will be hoping for more of the same at O’Connor.