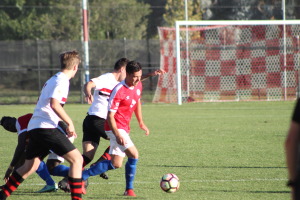 Canberra FC maintained their perfect start to the 2017 season with a 2-0 win over Woden-Weston FC thanks to goals from Alex Oloriegbe and Thomas James.

Canberra put the visitors on the back foot from the opening whistle, pushing them back and attacking the goal, putting forward a number of efforts to test Woden Weston goalkeeper Joshua Wade early on.

Canberra continued to dominate possession which turned into fantastic spells of one touch passing, creating a good chance for Dominic Giampaolo in the 15th minute.

The home sides insistence of intricate one touch passing around the Woden Weston defence paid off as they went up 1-0 in the 26th minute. Oloriegbe finished a delightful team play, towering over his opposing defender and heading into the bottom right hand corner.

On the verge of half time Woden Weston created their first threatening chance after breaking on the counter but the resulting shot went wide.

Heading into the second half Canberra FC dominated possession yet again, with the visitors still looking to create chances on the counter as they did just before the break.

Ten minutes into the second half Matthew Waters’ effort hit the top corner of the crossbar as Canberra signalled their intent for more goals.

Moments later Oloriegbe flicked the ball around the last defender and broke away one on one with the keeper but pushed his shot wide off the outside of his boot.

Despite the mounting pressure on the visitors, they forced their way forward a few minutes later forcing Canberra goalkeeper Sam Brown to leave his line.

Brown won the ball with his feet yet was forced to rush back into the box as the opposition had another attempt on goal, which Brown caught well on the edge of the box.

Canberra doubled the advantage in the 72nd minute as substitute James won the ball off his defender, broke down the left wing and slotted it home.

The resilient visitors would not quit though as they countered down the left flank three minutes later placing a brilliant cross into the box into a dangerous area, but the attack petered out as no-one got onto the end of the cross.

A pleasing performance from the home side despite some dangerous moments from Woden-Weston leaves them top of the table after four rounds ahead of Tuggeranong United’s visit in Round Five.

Woden-Weston will meanwhile travel to McKellar Park to take on Belconnen United as both sides look to rebound from losses.