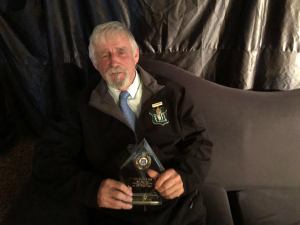 Ron was inducted as a life member at the 2018 Far West Football & Netball Senior Presentation Night held at the Thevenard Football Club.

Please find a transcript of the induction speech that was read out honouring Ron's commitment, dedication and passion for the Far West Football League.

At the end of season 2004 the Far West Football League was controlled and run by the Ceduna Council for a period of 5 years.  During this period an individual moved to our region that was very passionate about football and found our situation in Ceduna unique with a local Council running the Football League.

Season 2009 saw football return to the traditional structure of the Far West Football league being led by a President, Secretary and Treasurer much to the dedication, commitment, passion and vision of this individual.

Since 2009 our League has seen changes that people believed were pipe dreams prior to this time.  This was achieved by having someone with an open mind, experience from other country regions & no club alliance.  He worked tirelessly for all clubs to share equally in hosting the Far West Football League Grand Final on a rotational base.  The League has become proactive, financially stronger which allows opportunity for players, trainers and officials to participate in promoting our great game.

His commitment to our great game has changed football not only in Far West but also across Eyre Peninsula.  He has instigated positive change with the Mortlock Shield which has also become financially stronger, more professional and bringing an even balance financially for all Leagues. His idea’s, vision and thinking outside of the square has made many interesting meetings at EP level.

In July 2015 the Australian Football Community lost one of the best in the “Late Don McSweeny”. Don’s passing had a huge impact on Football across EP.  As acknowledgement to Don a plaque has been erected on the outside of the Office at Port Lincoln Football League “Home of Football on EP” to allow people to reflect and admire his services and achievements.  The person we are honouring tonight had the vision, respect and drive to have this plaque in place with the support of all Leagues and the Mortlock Shield Committee.  This plaque is dearly acknowledged and very special to Don’s Family.

Since becoming President in 2009 he is the longest serving President of the Far West Football League a role that he still holds today.

He has had over 50 years involvement in our great game in many roles including player, coach, administrator, board of directors, media personality, league and club president in many regional areas of South Australia and he played 33 games for his beloved Glenelg Football Club.  The Far West Football League has been very fortunate to have been involved in his football journey.

It is therefore with great pleasure that we honour Ron Redford with Life Membership of the Far West Football League, for his outstanding vision, commitment and ongoing dedication to our League.

Call in for a meal or refreshment seven days a week. Great supporters of Western Eyre Peninsula sport.

Congratulations to Premiers in 2021