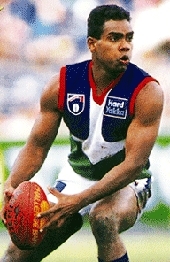 TRIBUTES have poured in from family, friends, acquaintances, Dockers and Kangaroos fans and the general football public from across the country for Gary Dhurrkay, whose untimely death came just over a week ago as a result of a motor vehicle accident in the Northern Territory.

Among those tributes, there is one recurring theme: that of a gentle soul always ready with a kind word and a quick smile. No airs or graces, just a genuine humility. And from what I knew of him, and it was only ever through a handful of brief meetings and small talk, I found this to be true.

Gary (pictured) was an original member of that early Dockers outfit that played the most entertaining yet wildly frustrating brand of football ever to be seen in the national comp. When he turned it on, Gary's footy exhilarating to watch -- like that one time he snapped a banana kick goal in the rain from near 50m out when cornered on the boundary against the Saints at Subi.

Gary was one of eight inaugural Aboriginal Dockers on the club's list in its debut season in 1995, which included a reinvented Dale Kickett, Scott Chisholm, Darren Capewell, Winston Abraham, Clinton Wolf, Douglas Headland and Nathan Mourish.

But there was more to Gary than his football, more than the fleeting fame he achieved at his brief stay at the elite level. It was the individual qualities that made the person inside: respectful, gently spoken, a proper gentleman.

I saw him last in Darwin, a day or so after the All-Stars match in February, at a Japanese restaurant of all places.

We spoke about the All-Stars game and how solid the brothers had played, of his work with his people at Nhulunbuy, and what kind of sushi he was going to have for lunch. I mentioned I had some footy cards of him and that if I found some more I'd post them up to him. (It is my regret that I never got around to doing this one thing for him.)

When we parted, he said "Nhama" -- Yolngu for 'Goodbye' -- with that big smile. It was this, that genuine interest in people that most would remember with fondness of Gary Dhurrkay.

Condolences to his family and friends. "Nhama, brother."

It's Australian for football