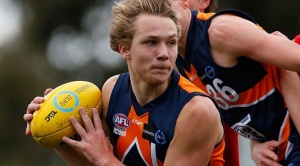 The Calder Cannons brought up their first victory of 2017 on the back of some very efficient forward-line work in Round 7.

Calder was the TAC Cup’s last remaining winless team before knocking off the Gippsland Power by 32 points at Morwell Recreation Reserve. The Cannons had dropped their previous six games by at least 19 points.

Calder proved to be particularly potent when going forward against the Power though, kicking 18 goals from just 39 inside-50s (an efficiency of 46 per cent). By contrast, Gippsland could only manage 12 majors from 52 entries (23 per cent).

Once the ball was moving forward, Gippsland found it difficult to stop the opposition scoring – no more evident than the Cannons dominating in the air to win the contested-mark count 19 to five.

190cm Mitch Podhajski emerged as match-winner for Calder with six goals from his 23 disposals and four contested marks, but he wasn’t alone in getting the best of the Power defenders, with 200cm Daniel Hanna taking three contested marks and booting two majors and 176cm Mohammad Moustafa (two contested marks and two goals) and 194cm Noah Balta (two and one) also proving a handful.

17-year-old NAB AFL Academy midfielder Jack Bytel was another star for the Cannons, dominating inside the contests with match-highs of 34 disposals, 17 contested possessions and 10 clearances. He also kicked a goal and recorded 12 handball-receives, illustrating his key role in linking Calder’s defence with its attack.

These names hold promise for the Cannons to return to the upper rungs of the NAB AFL Draft ladder over the next two years. After a haul of seven selections from the club in the 2014 AFL Draft, Calder has produced just one national draft selection in 2015-16 (Mitchell Lewis last year).

But some tough times early in 2017 could help turn the current Cannons crop into a bumper one.

Round 7 keys to victory:

98: The GWV Rebels lost the disposal count by 73, contested possessions by 17 and inside-50s by 13 against the Western Jets, but manufactured an eight-point victory by laying 98 tackles – 32 more than their opponents. Hamilton junior Cooper Henson led the way for the Rebels with a game-high 12 tackles.

10: The Oakleigh Chargers back line reigned supreme in an 89-point defeat of the Dandenong Stingrays, keeping their opponents to just five goals from 48 inside-50s. Bulleen Templestowe product Matthew King proved a difficult wall for the Stingrays to overcome, recording a round-high 10 rebound-50s.

14: It’s not too often that a team wins a game recording more handballs than kicks, but the Murray Bushrangers did just that in their 23-point triumph over the Sandringham Dragons. The Bushrangers had 164 handballs and 162 kicks, with Euroa junior Jett Trotter (14 handballs) Murray’s most prolific by hand.

STATS CENTRAL Round 6: Bushies back it up