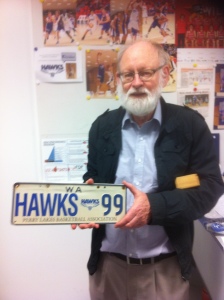 Ever wondered when the Perry Lakes Hawks first started? Along with their impressive trophy cabinet, what other achievements has the club enjoyed over the years?

In the late 1960’s I played (badly) in the Western Australian Basketball Federation (WABF) Metropolitan competition for a team from CSIRO.  A few years later our boys, John and Paul, then aged 8 and 6, were looking for a winter sport so basketball seemed a good idea!  We joined City Beach and got involved – coached a couple of teams and Treasurer.  My wife, Del, became a good team manager and club uniform person. Hawks came a little bit later when I was asked to be the City Beach delegate to the then Scarborough City Hawks Committee.  Our boys played Junior League (now known as WABL) for Hawks all through their junior days.

Fondest memories: It is hard to leave out the SBL successes of the Hawks and the Lady Hawks in the early 2000’s.  These successes were particularly pleasing because they revolved around home grown talent.  Another continuing fond  memory is of all “the kids” and families that have passed through Perry Lakes – junior competition and Hawks players.  It is nice now to be meeting their kids and to be able to be involved with 3 generations of some families!

Roles: I became Hawks treasurer in the early 1980’s, took over the organising of the Junior Competition in the mid 1980’s, and started the school competitions (with Bob Miller) around the same time.  At this stage I took on organising basketball camps, and was involved in organising around 30 camps.  Del was very heavily involved in all of these activities and increased her (voluntary) involvement with the Hawks when we took over the running of the Senior (Metropolitan) competition in 1996.  At about this time I retired from CSIRO and became the Hawks first “paid” administrator, taking a 50% pay cut in the process!  A year later Basketball WA asked me to be acting Manager of Perry Lakes Basketball Stadium (in addition to our Hawks commitments) until they found someone – I was still acting in the position 15 years later when we moved to WABC!  Also at that time, I started writing Stats for Coach John Gardiner and also, Coach Rick Morcom when SBL started.

Best thing about being involved in basketball: One great satisfaction is that I became Life members of my junior club, City Beach, my Association, Perry Lakes Hawks and the State body, Basketball WA.  I enjoyed my 5 minutes of fame – three times!