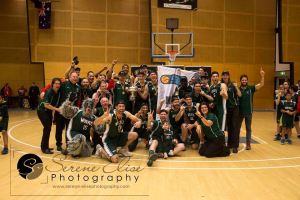 THE Merriwa Tavern & Bistro Joondalup City Wolves have been the dominant men's SBL team all season and delivered on Grand Final night at the Bendat Basketball Centre on Saturday with a commanding 105-75 victory over the Collie Crane Hire South West Slammers.

The Wolves finished the regular season three games clear on top of the standings and have now gone on to win the club's third men's SBL championship with a 30-point Grand Final victory over the Slammers on Saturday night on the newly named John Gardiner Showcourt.

The Wolfpack's other men's SBL titles came in 1993 and 2011, and now with the coach from that last winning team Ben Ettridge back in charge in 2015 they have claimed a third championship largely on the back of a huge Grand Final performance by Trian Iliadis.

Iliadis was named Grand Final MVP for his 28 points, six rebounds, three assists and three steals as he led the way in the win for the Wolfpack. He shot 10-of-18 from the floor for the night and 6-of-13 from beyond the arc.

Rob Huntington had a terrific game as well for the Wolves with 18 points, eight rebounds, four assists and three steals.

MVP-candidate Kevin Davis did a power of work inside for the Wolves with 14 points, 11 boards, three assists and two blocked shots while captain Seb Salinas added 11 points and eight rebounds, and Joel Questel nine points and four assists.

Veteran big man Damian Matacz was another strong contributor for Joondalup with 10 points and three rebounds.

However, losing the Grand Final shouldn’t diminish the performance of the Slammers to have made it. When playing-coach Ty Harrelson arrived three years ago, the Slammers had never been lower without a playoff appearance for 11 years and winning just 46 of their last 271 games.

They have made the playoffs for three straight years and now as Harrelson departs to take up a role as head coach at Wayland Baptist University, he leaves the Slammers in a good position to again contend for a championship in 2016.

Wade Hitchcock ended up top-scoring for the Slammers with 14 points while Harrelson finished his playing career with 12 points, five rebounds and three assists.

MVP-candidate Tre Nichols has had an outstanding season for South West but didn’t have the Grand Final he would have hoped with 11 points on 3-of-18 shooting.

It was Questel who was the game's surprise first scorer for the Wolves with the former Kalamunda Eastern Suns captain nailing a triple. Then following a Slammers three from Hitchcock, it was all the Wolfpack as they went on a stunning 14-0 run to open up an 18-5 lead.

Iliadis started the run with back-to-back threes before captain Salinas then nailed five straight points, Davis added one at the charity stripe and Iliadis scored again.

The Slammers were able to get back to within six, but an Iliadis steal on a pass from Nichols and a resultant lay-up saw the Wolves lead by 10 at quarter-time.

A triple from Harrelson to start the second period had the Slammers back within seven points, but strong work inside from Huntington, a three from veteran Doug Gates and a bucket from Matacz soon saw Joondalup out to a 14-point advantage.

Nichols finally made his first field goal for the Slammers with five minutes left in the half and he turned that into a three-point play, and then triples to Hickert and Hitchcock kept South West in touch, but the Wolfpack again finished the quarter strongly.

Back-to-back threes from Questel and then one from way downtown from Iliadis saw the Wolves lead 48-33 at half-time.

The Wolves then came out scoring the opening six points of the second half and then a monster dunk from Davis blew it out to 21, and then 24 on the back of yet another three from Iliadis.

If that wasn’t bad enough for Slammers, the Wolves then went on another 11-0 run kick started by threes by Iliadis and Salinas, and the Wolfpack's lead blew out to as much as 35 points in the third quarter, and was still 33 at three quarter-time.

The Slammers didn’t stop fighting in the fourth quarter and Harrelson got to bid farewell to the SBL after five terrific seasons with a three and another basket while Phillips also chipped in with a couple of triples, but it was the Wolves' night.

Davis had a big final quarter with eight points while Huntington nailed a couple from beyond the arc as did Salinas and Questel before Manyang Ngor finished the Grand Final in style for the Wolfpack with an offensive board and a put back.