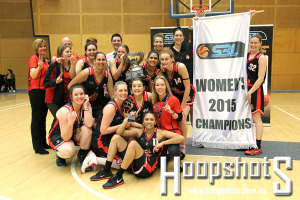 AN inspired Sami Whitcomb has delivered 41 points to lead the Orange Autos Rockingham Flames to back-to-back women's SBL championships with a 68-63 win over the Goodlife Homes Willetton Tigers in the Grand Final at Bendat Basketball Centre on Friday night.

Having never previously won an SBL championship, the Flames now have two in the women's competition inside 12 months backing up last year's breakthrough triumph, by claiming the 2015 title with a five-point Grand Final win having lost just twice right throughout the season.

The Tigers also lost just twice all throughout the year, but in the end it was reigning league MVP Whitcomb who was the difference between the two teams as she delivered one of the more stunning Grand Final performances.

The Perth Lynx squad member lit up the Bendat Basketball Centre on Friday night with 41 points, five rebounds and three steals on the back of shooting 14-of-24 from the field, 6-of-15 from three-point territory and a perfect 7-of-7 from the free-throw line.

Jacinta Bourne came up huge for Rockingham all night as well finishing with 14 points, seven rebounds and four steals while nailing four crucial bombs from outside three-point territory.

Centre Darcee Garbin had a fascinating battle inside with Louella Tomlinson and Zoe Harper, and finished with 11 points, six boards and three steals for the Flames.

Only four players scored for the Flames with Talisia Bourne nailing the other two points but Lizel Buckley worked hard for eight rebounds.

The Tigers had an outstanding season and never lied down in the grand final with centre Tomlinson leading the way inside with 14 points, 15 rebounds, six assists and two blocked shots.

Kate Malpass added 12 points, five boards and two assists as well for Willetton with Desiree Kelley having a strong performance with 12 points and nine rebounds.

Harper put in a power of work down low as well and ended the Grand Final with nine points and 10 rebounds on the back of shooting 4-of-8 from the floor.

Jacinta Bourne made a flying start to the game beginning with a steal and then nailing a three down the other end for the first score of the Grand Final.

A three-point play from Whitcomb then gave the Flames an early 6-2 lead before six points from Kelley, and a basket from Malpass helped the Tigers tie up the scores.

A triple each from Garbin and Jacinta Bourne, and two baskets and a pair of free-throws from Whitcomb then helped Rockingham open up a 20-15 quarter-time advantage.

The Flames' lead was then seven points early in the second period after another basket from Whitcomb, but the Tigers then changed things up and went into a zone defence and things started to happen.

From there, the Tigers went on an 8-0 run beginning with an and-one from Tomlinson. Five quick points from Garbin steadied Rockingham, but again Willetton caught fire with another 8-0 run, and despite five late first half points from Whitcomb it was still the Tigers leading 33-32 at half-time.

It was basket for basket early in the third quarter but then some aggressive defence from Lara Napier on Whitcomb fired up the reigning MVP and in a three-minute burst in the period she nailed two stunning threes, a pair of free-throws and two other field goals.

However, Napier and Tomlinson combined for Willetton's last 10 points leading into the three quarter-time to restrict Rockingham's lead to just three points.

By the time Whitcomb nailed two massive threes in the first five minutes of the fourth quarter, including a step back from the corner, the Flames appeared in control with an equal game-high lead of seven points but the Tigers refused to go away.

A tough lay-up from Ebony Antonio and then long two from Tomlinson had Willetton back within three points with just under four minutes to go, and then after a scoreless almost two minutes it was Whitcomb who nailed her sixth triple of the game to steady things for Rockingham.

Jacinta Bourne then nailed her fourth three shortly after and the Flames led by a game-high nine points, and went on to win by five to cap off a remarkable women's SBL season where the two grand finalists were split by just the five points over three meetings.