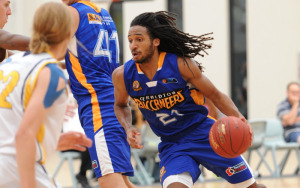 THE Geraldton Buccaneers would have been disappointed in their finish to the 2015 Men's SBL season after a third straight top three finish and now the job falls to new coach Aaron Trahair to get them back to having a crack at a better playoff performance.

Coming off a grand final appearance in 2014 against the East Perth Eagles, the Buccs backed that up with a strong regular season in 2015 finishing in second position with an impressive 20-6 record.

However, they came up short losing in the quarter finals to the seventh placed Goldfields Giants.

As a result, there is a new coach at the helm coming into 2016 in the form of Trahair.

He was assistant coach at the Rockingham Flames last season following a standout NBL and SBL career in his own right, and now he will be looking to have a big impact on the Buccs in his debut season as coach.

Bennie Lewis is a huge loss for the Buccs not only because he averaged 30.1 points, 5.5 rebounds and 3.9 assists a game last season, but because he was classified as a local and didn’t take up a restricted player spot that Cory Cooperwood stepped in to fill the void last season.

He has decided to return to the SEABL in 2016 to play with Frankston but Geraldton has done well to find a similar calibre player.

Matthew Adekponya has spent time in the NBL with both the Cairns Taipans and Townsville Crocodiles, and has decided to head west having most recently played in Queensland with the Mackay Meteors in 2015.

Beau Samuelson is another significant signing for the Buccaneers out of Clarion University with the guard also classified as a local.

The Buccs' have added a second import to help out Carter Cook with Maurice Barrow arriving after a strong college career at Fairfield University averaging 14.0 points, 5.0 rebounds and 1.2 assists a game during his 2013-14 college season.

With the experience and quality of Cook, Aaron Ralph and Mat Wundenberg remaining and some strong signings, there's every reason the Buccs can expect to be around the mark again and if they make the playoffs once more, expect a stronger showing after what happened against the Giants.

The Buccs scored a victory over the Goldfields Giants at the SBL Blitz at Warwick Stadium but suffered defeats at the hands of the Joondalup Wolves, Perry Lakes Hawks and Cockburn Cougars.

The Buccaneers' 2016 season begins on the road on back to back days against the Mandurah Magic on Saturday March 19 and then on Sunday afternoon against the Lakeside Lightning.

Their home opener at Active West Stadium will be against the Perth Redbacks on Saturday March 26.

EXPERTS THOUGHTS
Championship winning coach – ADAM FORDE
PREDICTION – 6th
While the main core of players return to Geraldton, the scoring power of Bennie Lewis will be missed, but hopefully replaced with Matthew Adekponya. Matthew had a brief stint with Cairns Taipans as a development player, but is it enough to replace the hole that Lewis will leave? Also what’s the chances of Aaron Trahair suiting up as player coach to help fill the void of their lack of bench depth?

SBL Slam Radio Host - MATT CECINS
PREDICTION – 5th
With the retirement of Prue at Lakeside, Mat Wundenberg can now lay claim to be the best rebounder in the league. He competes hard every single night and has been the driving factor in previous years. Aaron Ralph will continue to terrorise opponents from deep and Carter Cook has a complete game. How the new additions of Matthew Adekponya and Maurice Barrow fit in with their new teams and roles will play a determining factor in how far the Buccs go in 2016. I have a small question mark at the point guard position, however they will continue to be the toughest team to play on their home floor.

ANONYMOUS
PREDICTION – 5th
Big job ahead of Aaron Trahair in his first season in charge but he does have plenty to work with. Bennie Lewis was a rare gem of an All-Star unrestricted player but his departure leaves a big hole to fill. But new import Maurice Barrow and key signings Matthew Adekponya and Beau Samuelson look to be exciting ones which can keep the Buccs near the top of the standings. With Cook, Wundenberg and Ralph back again, they will ensure they are a strong force once more.