Tough call by Buccs ends well with arrival of Cooperwood 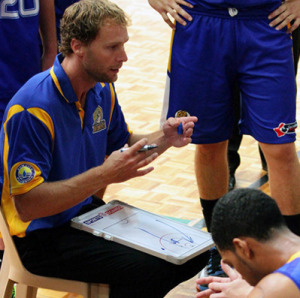 THE S & K Electrical Geraldton Buccaneers continued their winning ways on Saturday night despite a difficult week having made the decision to release one import Quincy Hankins-Cole and quickly sign another in Cory Cooperwood.

Despite that all happening in the space of just days and then Cooperwood being cleared and ready to make his debut with the Buccs on Saturday night against the Perry Lakes Hawks, Geraldton still came away with an impressive 105-88 victory at Active West Stadium.

That win improves the Buccaneers to a 13-2 record on the season as they attempt to go one step better than last year's grand final appearance where they lost to the East Perth Eagles.

Geraldton is now preparing to take on the Rockingham Flames on Saturday night also at Active West Stadium, but looking back on last week coach Mark Heron is proud of how everyone associated with the organisation handled a difficult situation.

Hankins-Cole was making a good contribution off the bench so far this season, but Heron and the club made the call that he wasn’t the right fit for the program.

That's where their previous contact with former Stirling Senators import Cooperwood came in handy, and he was quickly signed and made his debut in Saturday night's win over the Hawks.

The 27-year-old Cooperwood averaged over 20 points, almost nine rebounds and five assists in his previous SBL stint with the Senators and Heron is now delighted to have been able to sign him for the rest of the season.

And there is the added bonus that he knows Carter Cook well and now adds some added firepower to not only him, but also Bennie Lewis, Aaron Ralph and Daniel Thomas.

"We had a look around but we'd been speaking to Cory since back in 2014 when we first touched base with him to try and work on when he would fit into the line-up," Heron said.

"Unfortunately it didn’t turn out for the start of the 2015 season, but with everything that was going on and the fact that he was in Perth and uncontracted, it seemed to work out quite well.

"He's got some pretty good friends in Geraldton and he's played a lot of his basketball with Carter Cook and those two working on-court together is going to be pretty special.

"What he brings to the team is going to make us a little bit stronger. We were missing that passionate voice and energy on defence, and that's something that Cory definitely brings."

As for Hankins-Cole, Heron was happy with what he was providing the Buccaneers on the floor at 17.9 points and 10.2 rebounds, but not so much off it.

He had been given several chances to turn things around, but in the end Heron and the club felt that things just weren’t working out and the difficult decision was made to let him go.

"It certainly was a tough week and it wasn’t just a decision that I made, there was a lot of people consulted about the decision and we've got a fantastic leadership group up here," he said.

"We had plenty of talk with them about it as well as the coaching staff, management and also some external consultants as well who we asked for their opinion on the situation. At the end of the day we decided it was best to part ways with Quincy.

"His performances on-court were pretty reasonable especially coming off the bench and with him not getting as many minutes as he would have liked.

"He was still putting up some pretty good numbers but we were pretty certain on the fact that it takes a lot more than what you do on the court to be a professional as part of the Geraldton Buccaneers so we released him in regards to that and made the decision that he just wasn’t contributing off the court as much as he should have."

Given the difficult circumstances the week was provided, Heron was proud of his group to come away with the win over the Hawks and now is looking forward to a more settled lead in to this Saturday night's clash at home against the Flames ahead of the All Star Game on Monday.

"We were stoked to get the win. It was a hell of a week and it was extremely tough for not only myself personally but a lot of the other guys who have been involved with the club," Heron said.

"The amount of work that was put in to get Cory across the line in such a short amount of time to get all the paper work done and cleared, and to have him singed up to play on Saturday night was an amazing effort by management. It was just good to get the win so we can move on to the next stage of the season."