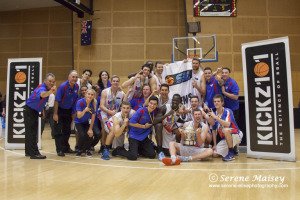 It was a sold out crowd in attendance at the WA Basketball Centre with hundreds of fans making the trip from Geraldton to support their team trying to win a second SBL championship, but it wasn’t to be with the Eagles ending up winning by 16 points.

That was largely on the back of the quality and experience of NBL championship winners Drew Williamson and Tom Jervis, but all night long the Eagles held the lead and were able to withstand a spirited Geraldton fight back in the second half to win.

It is just East Perth's second ever grand final appearance and now after losing in 2012, the Eagles have claimed an SBL championship for the first time.

And that comes just 24 hours after the Orange Autos Rockingham Flames also won a women's SBL championship for the first time on Friday night by beating the Lakeside Lightning 80-75 in the grand final.

East Perth was able to open up a sizeable lead of as much as 20 points in the first half and despite the Buccaneers getting back to within two to start the fourth quarter, they could never capture the lead in what was an exciting and physical grand final encounter.

Centre Tom Jervis led the way for East Perth with 22 points, 19 rebounds, three assists and three blocked shots to cap off a year that also saw him win an NBL championship with the Perth Wildcats and be named the league's Rookie of the Year.

Captain Drew Williamson is also an NBL championship winner with the Wildcats from 2010 and showed why in the grand final with 14 points and three rebounds, but most importantly outstanding leadership.

Mathiang Muo also had 12 points, Nikola Donlagic 10 and then favourite son and 250-game veteran John Taylor three when he came on for the final 39 seconds.

Carter Cook worked tirelessly for the Buccaneers with 26 points, seven rebounds and four assists while Bennie Lewis had 20 points and Aaron Ralph 12, but both shot a combined 11-of-43 from the field and 5-of-26 from long range.

Both sides were happy to bomb away from the outside early and neither was successful with the game's first score coming after more than two minutes and when an unsportsmanlike foul was called on Geraldton's Luke Wrensted.

Armour hit both free-throws but still neither team could hit a field goal until Cook took the Buccaneers' first two-point field goal attempt after four efforts from long range. He made it a three-point play but that would be Geraldton's only lead of the night.

Tupaea hit a two soon after for the Eagles and with five quick points to Muo, and then Jervis' first make of the night suddenly East Perth lead 11-5 after five minutes.

The Eagles' lead was then out to eight before Ralph's first basket of the night came and it was after his first four shot attempts were from long range.

A Shamus Ballantyne three then helped keep the Buccs within four points of the Eagles after the first period, but then East Perth scored the opening nine points of the second quarter to open up its first double-figure lead of the grand final.

Lewis answered with a three for the Buccaneers but Jervis responded with two baskets and then when Williamson nailed one from long range on the back of an offensive board from Jervis, East Perth had a 17-point advantage with just under seven minutes to go in the half.

The lead for East Perth was then 20 points after two more baskets to Tupaea and Williamson before the Buccaneers answered through Young.

The Buccs did get back to as close to 12 points, but East Perth stretched its lead back out to 16 points by half-time with the Buccaneers in foul trouble with five to Young and three to Cook.

Given the Buccaneers' firepower, there's no way the Eagles would have thought they were safe at half-time and that's exactly how it panned out.

East Perth still led 55-39 after three minutes, but then Geraldton got rolling with a 9-0 run on the back of scores to Cook and Lewis, but most remarkably desperation buzzer-beating three from deep by point guard Wrensted.

That had the Buccaneers back within seven and despite steadying threes to East Perth from Armour and Williamson, the Buccs had all the momentum and they were within three when Cook nailed a three with 35 seconds left in the third quarter, and were only four down heading into the fourth.

Cook hit a pair of free-throws to open the fourth quarter and make the margin two points, but that's as close as the Buccaneers would get.

Seven straight East Perth points came straight after and from there despite the best efforts of Geraldton, the Eagles never led by less six points on their way to the championship victory.