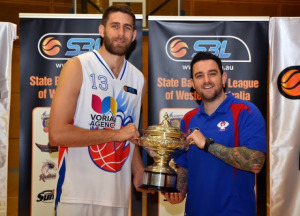 EITHER the Geraldton Buccaneers will win a second men's SBL title on Saturday night or the East Perth Eagles a first when the two teams do battle in a highly-anticipated grand final at the WA Basketball Centre.

The Sun City Plumbing Geraldton Buccaneers will play the Vorian Agency East Perth Eagles at the WA Basketball Centre in the men's SBL grand final of 2014 with tip-off to take place at 7.30pm.

The Buccaneers have won just the one SBL championship from five grand final appearances so will be desperate not to make it five losses in championship deciders while the Eagles are hunting for their first title on their second attempt.

There is plenty of talent to be on show on Saturday night as well in what is sure to be an exciting contest.

The Buccaneers and Eagles met twice during the regular season with Geraldton winning the first encounter in Week 3 by 20 points at Morley Sport and Recreation Centre.

The next meeting didn’t take place until Week 18 at Active West Stadium and it was the Eagles who won on that occasion 101-96 to mean they have one win apiece against the other so far in 2014 heading into the grand final.

The Buccaneers have previously played in five men's SBL grand finals and only managed to win one championship.

That came back in 2000 when they beat the Lakeside Lightning 96-76 in the grand final.

The Buccs haven’t managed to make an SBL grand final since 2001 but ever since being an SBL foundation club in 1989 they have always been a strong outfit.

Throughout Geraldton's previous 25 seasons in the SBL, it only has not finished with a winning record on three occasions and not finished inside the top eight those three years.

The only time the Buccaneers missed the playoffs and didn’t have winning seasons in consecutive years was in 2011 and 2012, but they didn’t stay down for long and have been strong the last two years culminating in this year's grand final appearance and minor premiership.

Despite finishing last season in third position, the Buccaneers lost to eventual grand finalists the Joondalup Wolves in the quarter finals but hit back in 2014 ending up claiming the minor premiership with a 19-7 record.

The Buccs have since gone on to beat the South West Slammers and Lakeside Lightning in four straight playoff matches to qualify for a first grand final appearance since 2001.

Meanwhile, the Eagles have never won either a women's or men's SBL championship despite losing one grand final in each competition along the way.

East Perth has been part of the SBL since the beginning in 1989 but up until the last five years have never been able to cement themselves as regular playoff participants.

Between 1995 and 2009, East Perth never seriously threatened to even make the playoffs but those hard times make everyone at the club only even more focused on trying to take full advantage of having a strong line-up right now.

The Eagles have put the work in place to become a force in the men's SBL again and haven’t missed the playoffs for five straight seasons now.

East Perth's men reached its only grand final back in 2012 when they were beaten 105-72 by the Cockburn Cougars and now the Eagles haven’t forgotten the memories of that defeat or their departure from the semi finals at the hands of the eventual champion Lakeside Lightning either.

The Eagles had a 2014 season where at different times Jervis, Muo and Williamson have been unavailable either through injury or other commitments, but they managed to stay in the playoff race before a strong finish to the year.

When the Eagles went on a run of losing seven of eight matches between Weeks 3 and 7 of the season things were beginning to look a little bleak, but it didn’t stay that way for long.

Between Weeks 8 and 18, East Perth went on a run of winning 11 of 13 matches to set up an eventual playoff spot.

The Eagles entered the finals from seventh position but then beat the second-placed Rockingham Flames in the quarter finals and the third-placed Perth Redbacks in the semi finals to make it through to a second grand final in three years.