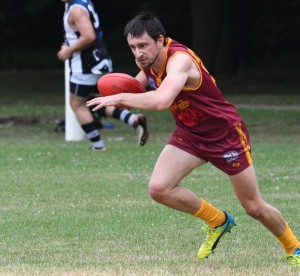 I wanted to take this opportunity to thank everyone for what has been an excellent 2018. Everyone who pulled on the boots for the club this year should be proud of what you accomplished. I say with certainty that the club is in the best place it has been for a number of years and I fully expect we should take even greater steps next year. While we did not achieve our objective of making finals, in every other KPI (Key Performance Indicator – thanks "Fish" Fischer) we fully exceeded what I could’ve hoped for at the start of the year. Our training attendance was exceptional all year, with 15+ guys regularly being on the track. We blooded about a dozen rookies and had 35 players pull on the boots in 2018. The approach to match-days was night & day compared to previous years. I really appreciate the way everyone made the effort to be on time and to set standards for what should be the norm for a game of footy. Most importantly, the off-field comradery, was amazing and to see friendships grow has been probably the highlight of the year for me.

As announced on Saturday, reluctantly, I am stepping down as Gargoyles head coach for 2019. The time is right to hand over the reins to someone new and my record as coach (5 wins, 17 losses) does not stack up anyway against super-coaches Macca & Jezza (100% winning record)! It has been an honour to lead such a great club for two-years and I am genuinely excited to see the progress we can make in 2019.

For those who are wanting to play again next year, the most important thing you can do over the winter is work on your skills. This is the difference between being an ok team, and being a team that will consistently play finals.

I want to again thank a few people. Macca – for being such great support as assistant coach. Jezza – for leading us so well on & off the field. Onions – for doing the finances so well & making sure the bills are paid. Bean – for putting so much time into the club and running it so well. I also wanted to thank a great mate, Kerm, who encouraged me initially to take the role of coach and who has helped me so much with everything from matchups to recruiting. You’re truly the G.O.A.T and one of the main reasons we had such a good year.