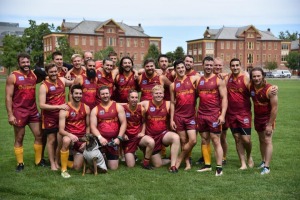 The Gargs travelled to their happy hunting ground, Humber South, where the boys were coming off a one-game win streak. The equation was simple – a win would guarantee finals birth. It would be a tough ask against an experienced Roos team that beat the Gargoyles comfortably earlier in the year. The first ten minutes were extremely tight with the Gargs enjoying the majority of the play. Steve “Dozza” McLeod was in everything early while Brian “Bachar” Correia was cutting off attacks and giving plenty of his trademark run. A few whiffed goal opportunities by the Gargoyles were quickly punished by the Roos. With quarter-time down, the Roos lead by three goals.

The boys effort in the second was classic Gargoyle: heavy hitting and solid. Michael “Fish” Fischer continued his outstanding second half of the season with some impressive clearance work. Up forward, his brother Eli “Minnow” Fischer was a lively target across half forward. However, despite the intensity and relentless attack, too many skill errors plagued the Grand River heros and the Gargoyles offensive effort could not push deep enough to get on the scoreboard. The Roos led by a punishing seven goals at half-time.

With the game-time and the 2018 season slipping away, the Gargoyles bit down on their mouthpieces and showed some fighting resolve to break even in the second half. The backline tightened with "Dozza" McLeod and Josh “Gent” Burr leading the way. Kyle “Bean” Mundell was allowed off his leash and found his way to the forward line. Showing remarkable future potential, "Beans" demonstrated great instincts on the lead and giving us a real link-up target. Derek “4-goals” Govier added to his tally for the year with an outstanding long-range goal. Jokes aside, this was an awesome bit of play and showcased how far his kicking and skills have come in the past year - nice work, Derek! Sam “Jesus” Skelhorn got on the scoreboard too, finishing the game with a sold second-half, scoring with three of the four Gargoyle goals. While buried by an eight goal deficit in the end, an admirable effort was brought forth against a seasoned Roo team heavy with Australian talent. Coming off a best-on-ground performance against Ottawa, Tyler “Scoops” Schwartzentruber was again our best, his inside and outside game was equally strong as he played unchanged through the midfield.