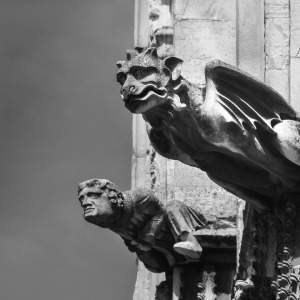 Saturday, August 25, 2018 saw the Gargoyles take to their home-field at Margaret Greene Park in a battle against the Demons and Mother Nature herself. As game time drew near so did a significant storm-front that would bring punishing rain, wind, and footy chaos.

Due to low numbers in attendance by the Demons the game started with 9 vs 11 on the field in favour of the Gargoyles before the weather began to rear her head. Spacing and ball movement allowed the Gargs to quickly get on the board and the home-town boys were off to the races! With the goal, the weather became increasingly present - forcing spectators to huddle under trees and all players to fight to maintain control over a now slick and muddy footy pill. Despite this turn of environment and decreasing numbers due to injuries the Demons maintained a fercious pace and clawed onto every opportunity the Gargoyles gave them.

Coming into half-time saw the Gargoyles with a significant lead but with both teams having alternate blessing and curse fighting wind and weather - this contest was far from over! As the third quarter matured the Demons continued to be plauged by injuries as the Gargoyles smashed their way into each contest. To relieve the Demon bench a number of Gargoyles made the noble scrafice to help the beleagured vistors and assist with dwindling numbers. Despite this assistance rendered, the tenacity, work-rate and above all, accuacy of three key goal scorers, pushed the Gargoyles to a crushing 139 to 3 final.

Collecting season best goals, Dave "Uncle" Maurer and Sam "Jesus" Skelhorn could not be stopped, scoring six goals a piece. Likewise, Derek "Goves" Govier showed a standard of Canadian accuracy rarely seen, kicking four goals in himself, including a career best thread-the-needle from the outside boundary line on the run.

The Gargoyles would like to tip their hats to the scrappy Demons that were able to attend including a youngster at just 16 years-old. Despite low numbers and inclement weather the Demons showed will and grit that the Gargoyles respect and hold in high regard for their own players. Many thanks to the Gargoyles who supported Demon numbers in the second half.

With the return of the shed came the usually post-game festivities where the boys were now sheltered from the elements. Of special note was Dave "Big Boi's" song, All Night, carried over from the prior weekend tour to Ottawa, which provided an extra bit of energy and joy to the winning celebrations.