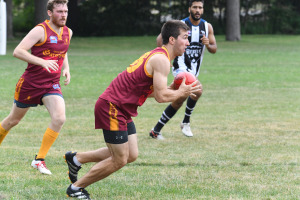 Round 7 - Gargoyles vs Wildcats

The Gargs took on the Wildcats in a match that would shape the finals aspirations of both teams. Fielding the strongest team for the year, the Gargs were confident of their chances against a Hamilton side that had been coming off some big wins. Ty “Scoopa” Schwartzentruber got us off to a dream start with a long-bomb goal kicking uphill. In the middle, our newest Aussie recruit Alex “Boots” Butenko was providing a physical presence and linking up with our forward line. Coming out of temporary retirement, Greg Logel was a focal point up forward. The boys led by 22 to 0 at quarter time.

The second quarter we started well with our defence – Dave “Big Boi” Thompson, Brian “Bachar” Correia and Kyle “Bean” Mundell repelling everything the Wildcats could muster offensively. Up forward, Steve “Dozza” McLeod was lively and was able to hit the scoreboard. The Gargs went into halftime with a solid lead, but the job far from done.

The third quarter became an arm-wrestle as Hamilton began lifting their workrate. The backline held strong though and the Gargoyle fowards added a couple of goals to extend the margin at the final break. The goal in the last was to keep the Wildcats goalless - mission achieved. Nate Millar showed why he is one of the top Canadians in the league with his hard-running setting up multiple goals in the last. Logel added his 3rd for the day and the Gargoyles ran out 55-point winners. Special thanks to the boys who helped out with playing for Hamilton, especially Eli “Minnow” Fischer who was comfortably in Hamilton’s best players for the half he played.

Round 8 - Gargoyles vs Rebels

The second trip to Humber for the month was always going to be a tough one. Down a number of senior players through injury, the Gargoyles were blooding a new-look team for our second duel with the Rebels. As has been the case far too often this year, the boys started slowly with the Rebels establishing a 4 goal lead at quarter time. To the boys’ credit, the second was one of the best for the year. Kyle “Bean” Mundell was dominant down back and carried on his excellent form from the week before. The Schwartzentruber brothers were working hard through the middle and were aided by Derek "Goves" Govier who got his hands on a lot of footy and disposed of it well. Sam “Jesus” Skelhorn was lively up forward and always provides us with a spark when we need it. 7 goals to 2 at half time, the Rebels way.

Unfortunately the Gargoyles could not add to our tally after half time. The Rebels structures and experience was too much, but the margin was kept respectable. Nic Foti played one of the quarters of the year in the 3rd, constantly repelling attacks and beating his man one-on-one: awesome game, Nic! A good experience for the new boys and thanks to the Rebels for the contest. "Beans" was our clear best-of-game and kept adding to his case for all-Ontario honours after missing out last year