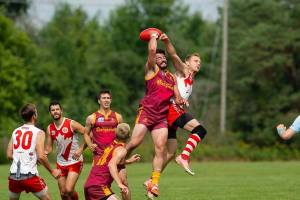 The Gargs ventured out to the nation’s capital on the weekend for their matchup with the Swans. With the Swans nursing some sore bodies, both squads agreed to a 14 on 14 contest. Under siege early, Josh “Gent” Burr and Michael “Onions” Gentile helped minimize the damage the Swans inflicted on the scoreboard through some excellent defensive work. Through weight of numbers though, the Swans added seven goals to zero in the opening terms - a show of their class and why the Swans from the north are the competition leaders.

After a rev up from the coach, the second quarter showed much improved activity by the boys in crimson. Brian “Ned” Correia was working tirelessly in the middle and pushing deep into defence to help out. The Gargs got on the scoreboard and held the Swans to 3 for the quarter. Michael "Fish" Fischer dished out the hit of the season and gave the Swans something to think about next time there was a ball in dispute.

We swung the magnets around in the third quarter and got some strong contributions from rookies Dave “Big Boi” Thompson and Tyler “Tigger” DaSilva. Dave’s long-bomb goal from the pocket was a highlight. A goal-mouth scramble that the Gargoyles denied late in the third quarter was a season-long highlight with relentless desperate efforts denying the Swans a goal.

The final quarter was again an improved effort. Tyler “Ice-T” Schwartzentruber capped off a best-on-ground for the Gargoyles performance with a clever interception and long-range goal. An awesome effort from the boys and one that deserved a beer (or many) at the end of it.