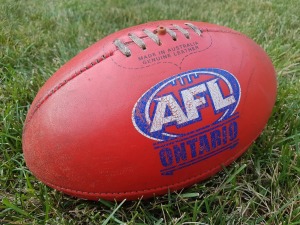 After four years without a win at the ground, the Gargoyles were hoping to break their Humber losing streak against the Blues.

The local boys got off to the perfect start with temporary Aussie import Nick “Nimble” Brooks goaling in the first minute. His combination of speed and nimbleness proved far too much for the Blues to handle as he finished with a total of three first-quarter goals. In the middle, Michael "Fish" Fischer was dominating the ruck and giving our midfielders first use. Another Aussie import, Alex “Chuck” Butenko was directing traffic with his lethal right shoe and set up a number of scoring opportunities. 7 goals to 0 at quarter time.

In the second the Gargoyles continued to give more of the same top-tier results from our midfield. Brian “Bachar” Correia was dominating playing the wing and Derek Govier continued a great month of form with some neat disposals. “Nimble” bagged his fourth and Sam “Jesus” Skelhorn got on the board a couple of times too. Steve “Dozza” McLeod showed his class with some lethal delivery inside 50 and set up a couple of goals.

The second half, the Blues tightened up their play and the boys in crimson struggled to negotiate their extra numbers in defence. “Chuck” Butenko continued his stellar game with a couple of goals and Josh Burr was a rock in defence. Debutant Davis Thorne’s goal was a highlight in a scrappy 3rd quarter. Some way-ward kicking saw the Gargoyles unable to push the margin into triple figures but the Gargs ran out 98 point winners.