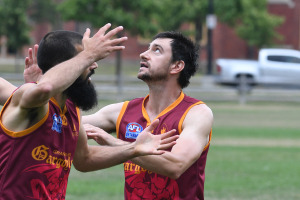 On Saturday, Aug 11, 2018 the Gargoyles took to the field against the Toronto Dingos in a must-win game. A win would give the Gargoyles the inside track into playing finals and a loss would make it difficult with a challenging schedule to finish the year. The Gargoyles came out of the blocks on fire. Coach Sam Wood opened the scoring in the first 30 seconds and Michael & Eli Fischer scoring soon after. A long bomb from Ben Knowles made it a 4 goal to zip start and the Gargs were playing hard, exciting footy. The Dingos made some changes and pegged a couple of goals back, giving the Gargoyles a goal lead at quarter-time.

In the second quarter the boys in crimson started slow with the Dingos harder at the ball and more efficient going inside 50. Captain Jeremy "Jezza" Schwartzentruber was forced off with a concussion as a result of his bravery deep in defence. The Gargoyles were lucky to not go into the long-break down by more had it not been for awesome efforts by Aiden McQuoid, who was on one leg, and Benny Knowles who was rag-dolling the Dingos forwards mercilessly.

The Gargs started the third slowly, before a spark was given by Eli “Minnow” Fischer who slotted his second of the game. His brother, Michael "Fish" Fischer, was working tirelessly around the ground, while Kyle "Beans" Mundell was breaking even with one of the league’s best forwards. Up front, Sam “Jesus” Skelhorn was backing up a great month of form with more strong leads from centre-half-forward.

With the game there for the taking in the last quarter the Gargoyles had some early opportunities but could not capitalize in front of goal. A major to Dave Maurer pegged the lead back, but the Gargoyles ran out of legs and went down by 5 goals in the end. A really disappointing result, but the Gargoyles were outworked and outplayed by a more determined & skillful Dingos team. The Gargoyles go into the last month of the season needing two wins to make the finals after results did not go their way.