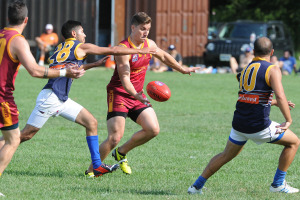 The Gargoyles took the field against the reigning premiers eager to get the 2018 campaign back on track after three tough losses. A really pleasing effort to have 20 players pull on the jersey given the long drive to Toronto and late timeslot.

The first quarter was a struggle as we struggled to adjust to the Eagles’ intensity and structures. Aiden McQuoid provided some of his trademark drive from half-back and repelled numerous scoring threats. The scoreboard was not what we wanted to see at quarter time and clearly we were still working off our Canada Day hangovers.

Derek Govier responded to the coach’s challenge in the 2nd quarter and clamped down on the Eagles best playmaker. At the other end of the field, Mike Gentile was tasked with the role of providing a ‘forward tag’ which he executed perfectly. Unfortunately we still couldn’t penetrate the Eagles defence and we went into half time down by 8 goals.

The second half saw the magnets thrown around and we gave players valuable experience in new positions. Brian Correia aka Bachar Houli was thrown into the midfield and continued on his stellar form. Big Mike Fischer competed hard all day in the ruck against a more experienced opponent and took the game on at every opportunity. Up forward, Steve McLeod and Elijah Fischer gave us a spark with some creativity with the ball. First gamers Jonathan Fischer and Tyler DaSilva showed a strong desire to compete and were impressive in their first games.

Mike Gentile capped off a great game with a much deserved goal and our 4th quarter was our best of the day. We finished off an extremely tough month of footy with another disappointing loss, but we will be better for the run. Our next month sees us play 4 winnable games and our best footy is still ahead of us.