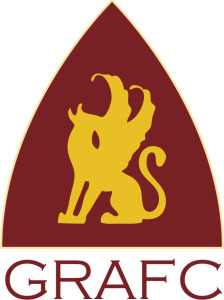 On Saturday, the Gargoyles suited up for a good ol’ fashioned wet weather slugfest. The game was an important one as we celebrated Andrew Matthews’ 100th game and Michael Gentile’s 50th. Our opponent – the Roos – were flying and undefeated after 4 rounds, so we were going to need to play our best footy to have any chance.

Early in the game it was Josh Burr who set the standard with ferocious tackling and determined attack on the ball. The rest of the team followed Josh’s example and went toe to toe with the Roos for the first 15 minutes of the game. Returning from his honeymoon, cult favourite, Sam “Jesus” Skelhorn got us on the scoreboard with a World-Cup inspired strike from the top of the box. A couple of late ones to the Roos stretched the margin to 3 goals at quarter time.

In the second, again we broke even early in the quarter. Ben Knowles, playing a new role in defence, provided plenty of drive from half-back and helped set up our second, a long bomb from coach Sam Wood. Our lack of fitness hurt again as we leaked late goals to go into half time facing a 7 goal deficit.

Despite the best efforts of Tyler Schwartzentruber and Andrew Matthews in the midfield, we struggled to contain the Roos in the third. Some undisciplined acts sparked the Roos into action and we could not respond to their experience and quality all over the park.

In the final quarter, the effort was greatly improved and we looked dangerous going forward. Jesus was a focal point at Full Forward and it was great to have him back on the pitch, finishing with 3 of our 5 goals. The Roos ran out eventual winners by 100+ points. The loss was a reality check for the Gargoyles after a strong start to the year against some quality opposition. July looms as an important month for us with some winnable games on the schedule and 3 trips to Humber.