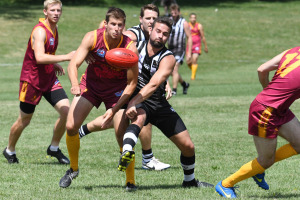 After the week off from the bye, the Gargoyles were ready to get back to business against the Rebels. Boasting some of our strongest numbers for two years, we fielded a deep bench and a quality starting lineup, even with a number of first-choice players out.

The Rebels started strongly with their all-Australian midfield getting the upper hand. Despite possibly contracting Malaria in the Dominican, Andrew Matthews was proving tough for the Rebels to handle and kicked a late goal to keep it a 1 goal margin at the first break.

Our backline led by Kyle Mundell and Brian Correia fought off numerous attacks by the Rebels in the second quarter and down the other end, Branislav Sisljagic in his first game back from a knee injury kicked a team-lifter to bring it neck-and-neck at half time.

The third quarter saw the more experienced and disciplined Rebels kick away to a five goal lead at ¾ time. We lost Aidan McQuoid to a hamstring and Sam Wood was hobbled with a shoulder. Some outstanding efforts from Michael Gentile and Tyler Schwarteztruber kept us in with a sniff. Late goals from Matthews and Wood brought the margin back to four goals at the final siren. A fantastic effort from the boys given the Rebels had won their last three against us by 100+ points.

Jeremy Schwartzentruber was herculean in the ruck all day while Mundell and Jacob Martin showed their class. Gentile and Ty Schwartzentruber battled hard, with the former playing a vital role as a pressure forward.

A big test looms against the undefeated Roos next week in Andrew Matthews’ 100th game and Michael Gentile’s 50th game.