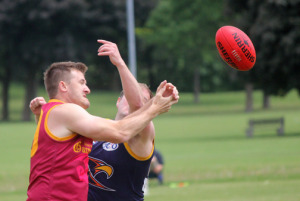 The Gargoyles started their 2018 season off strong with a big defeat at home against the Central Blues. After 3/4 time the game was called due to low numbers and injuries to both sides, and the Gargoyles kicked the winning score of 14.13.97 to 1.1.7. The Blues kicked the first goal of the game along with a behind, and then never took a scoring shot for the rest of the match. Despite playing the match with zero Australian players in the lineup, a 7 goal second quarter for the Gargoyles really broke the game open.

In Round 2 the Gargs came up against the defending premiers in the Toronto Eagles, and although they put up a good fight the Gargs fell to the Eagles 11.10.76 - 4.6.30. After not scoring in the first quarter and then giving up five goals to the Eagles in the second quarter, the Gargoyles played better in the second half and kept the margin to a reasonable amount.

After three rounds in the AFL Ontario season the Gargoyles currently sit 4th on the ladder with 4 points. In Round 4 the Gargoyles play at home again versus the Toronto Rebels. The game is at 12:00 on Saturday, June 16th at Margaret Greene Park.