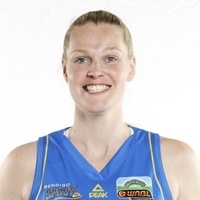 Bio: Since first arriving in Bendigo in 2009, Aubry has become a staple in Bernie Harrower’s team, notching up 121 consecutive games, playing a leading role in the Spirit's back-to-back WNBL Championships.

The Canadian has fit seamlessly into the Bendigo program, adapting her game to fit the teammates around her.

Aubry played a major role in the team’s two championship runs, coming up big in the post-season, providing interior defensive presence and three-point shooting that has become a staple in Central Victoria over the past five years.