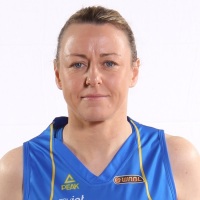 Bio: A living legend of Australian basketball, Harrower achieved success wherever her amazing 20-plus year career has taken her. Emerging as a 16-year-old with the Melbourne Tigers, Harrower was quickly snapped up by the AIS and after two seasons in Canberra the guard moved to Adelaide, helping the Lightning win the 1994 WNBL title.

Harrower re-joined the Tigers in 1995 where she would become one of the premier point guards in the competition, earning four-straight WNBL All-Star Five honours between 1997 and 2000. A move to the WNBA and Europe followed before returning to her hometown Bendigo Spirit in 2008.

The four-time Olympian for the Jayco Opals would go on to win her first WNBL Most Valuable Player award in 2010 and make Bendigo a regular in the WNBL post-season.

Here she would guide the Spirit to their first WNBL Championship in the 2012/13 season, producing a memorable season where she would be an All-Star Five winner for the seventh time in her career.

Harrower has been equally as dominant on the international stage, winning four Olympic medals to go with her 2006 FIBA World Championship gold medal.