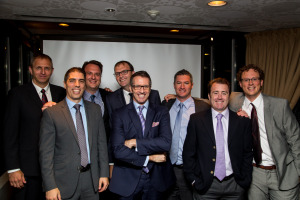 Founders, Life Members, players, best and fairest winners, coaches, premiership players and clubmen were all treated to a night in the spotlight at the Toronto Dingos Football Club 20th Anniversary Gala at the Atlantis Pavillion on Saturday night.

More than 80 guests, comprised of current day members, alumni and former Dingos now living in other cities and countries made up the numbers in what can only be described as one of the greatest events in the club’s 20 year history where the hard working volunteers were acknowledged.

In between speeches on how the club was formed, what it’s like to play Australian Rules as a Canadian and how to build culture at a football club, MC’s Wade Edwards and Justin Robertson unveiled the top 20 Greatest Moments at the football club. Coming in at number one was the Three-Peat that took place between 2003-2005, edging out 1995 (when the club was founded) and the 2003 premiership dedicated to Mike Lazecki.

Following the Greatest Moments, the MCs also went through what it takes to become a Life Member and called on stage the 11 Life Members (only 9 were present) and ran through what they were inducted for, followed by a group photograph. Paul Tinkler and Chris Buczkowski then took the microphones and announced the All-Star team of the past 20 years that included 18 players, an eight-man bench and three coaches. The evening was capped off with dancing that went well into the night.

Ramsey Blacklock has captured the event with some brilliant photos. To see them, head here.

For a list of all the Life Members, head here.

As part of the evening's celebration of the history of the club, 20 posters were created, each indicating the highlights and award winners from a Dingos season.  You can see those posters here.

Thanks to everyone that has played for this great club and to all the volunteers who have put in some serious man hours to keep the culture and Dingos brand alive and well and what it is today.

Below is a message from Dingo Tino Riccio, who couldn't make it to the Gala event:

My Dingos.  I wish I could be there to share this night with you all. Its amazing to me that when I moved to Australia, the thing I would miss most of all was being part of the Toronto Dingos….an Australian Rules Football Club.  You will all no doubt hear about what this club has acheived over the last 20 years, who would have known that something this special would come out of a small meeting in Tink’s living room all those years ago. We have a club that has stood the test of time, and made lifelong friends of people who would never be brought together…and ultimately enjoyed success on the playing field.  This is the power of sport for sure, but special things are created by special people.
The special people that made this club happen and thrive in my time include from the earliest days... Chris Cunning, Helga, Tinks, Jonesy, Zisso and of course Terry Wallis, the ultimate teacher and motivator. If you don’t know him go shake his hand tonight and give him a kiss for me.  Later Big C,  Brolsy, Jake and Craig Stewart, a true legend of Aussie Rules in Canada.
I know i haven’t mentioned many and of course there are so many others the fill the gaps in other years.  I don’t know you all, but of course together we all made this a great club.  If you are a Dingo past or present and in Perth, please come and find me.
I also want to acknowledge our suupporters, family friends partners. A club isn’t only something that exists on a playing field. It needs people that care and make commitments. Thanks for all the support.
So….enjoy the night and savour what it feels like to be part of something special. To be a Toronto Dingo.