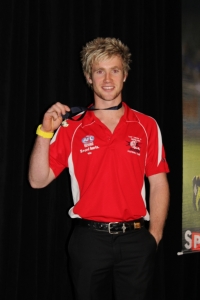 The Morrish Medal is not unlike its bigger brother, the Brownlow Medal. Both awards hard to tip, the favourite often beaten by a smokey that no one predicted. Going into the awards dinner at Etihad stadium, Gippsland Power staff knew they had a few vote getters, but with such a balanced team in 2012 it was thought the votes would be too evenly spread to produce a winner.

After Danny Butcher went so agonisingly close last year, Power were hoping that one of the boys could get over the line to be the fourth Power player to win the TAC Cup highest honour. Players such as Ben Kearns, Nick Graham, Tim Membrey and Shannen Lange all had stand out seasons, but it was Nick Rippon from the Nth Ballarat Rebels that went into the award as red hot favourite.

By round ten, the leader board was jammed with a number of players in the hunt. One of those was Nick Graham, in the lead with three other players on nine votes. As the live counting commenced, the tension began to rise with Nick Rippon and Nick Graham pulling away in the voting. With three rounds to go Nick Graham was four votes behind Rippon. There was still a chance Nick could poll enough votes as he had couple of best on ground performances in the remaining games.

Round fifteen against the Eastern Ranges was one of Nick’s best games of the season, but when team mate Tim Membrey took the three votes, it seemed that a Power player was destined once again to be the runner up.

Round sixteen against the Sandringham Dragons was a slog in the wet and boggy conditions. While Nick put in a strong performance in a hard fought match, Power went down against the Dragons for their second loss of the season. Polling votes in a losing team is always a big ask, and as the votes were read out the room erupted on hearing “Three Votes, Gippsland Power, N Graham”. Nick was now just one vote behind the leader.

The final regular season match against Northern Knights wast not one of Powers finest team efforts, just getting up for the win. But the game saw another dominant performance from Nick Graham. With Nick Rippon not polling any votes in his final match, it all came down to the Power v Knights game. Nick Graham was given the nod with two votes, becoming the 2012 Morrish Medallist.

As proud parents Jen and Brian looked on, Nick received his medal and was interviewed on stage. He was glowing in his praise for his coach Nick Stevens, the man he attributed to having the biggest impact on his footballing career. “The way he has found the best out of me and put it into my football, as well as my life outside of football has been unreal”.

Always a skilled player with the ability to kick and set up goals, Graham was challenged by his coach this year to lift his fitness and defensive side of his game. The improvement in these areas and the tactical knowledge gained through Stevens coaching has enabled Nick Graham to become a well-rounded player.

Nick went about facing the media and handling the spot light in the same way he approaches his football, honest, professional and impressive. Talking to him after all the cameras and bright lights had been turned off, he was still shaking from the experience “I can’t stand still” he said with a beaming smile.

Taking a moment he slipped out past security and on to the ground at Etihad Stadium to capture his special moment in a photo. Whilst honoured to be recognised as the best player in the league, it was easy to see that making it out on to Etihad for the big dance with his team mates in two weeks’ time was what mattered most to him.

It was fitting that Graham was also named alongside his long time best mate and Power team mate Tim Membrey in the TAC Cup team of the year. The two Traralgon boys have shared their football journey together since under 10’s and are hoping to finish their junior career together with a flag.

Power play the Sandringham Dragons this Saturday in a Preliminary final at Visy Park. With the whole of Gippsland behind them the boys will attempt to reach the TAC Cup grand final for the fourth time in club history. Expect the number 9, Nick Graham to be putting in another huge effort. The epitome of focus, there’s nothing this young man can’t do once he sets his mind to it.