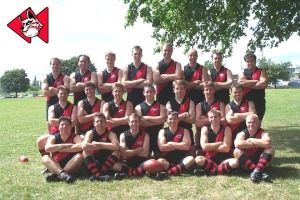 For the Toronto Dingos, 2020 marks the 20th anniversary of the club’s first AFL Ontario Premiership! That legendary season began 20 years ago, today with a match against the Lawrence Park Rebels.

On May 27th, 2000 the Dingos kicked off their 5th season in AFL Ontario. The 1999 season was successful as the Dingos earned an 8-3 record. Unfortunately, the season would come to a premature end as they fell to the Rebels 08.07 (55)-05.10 (40) in the Elimination Final. The Dingos would get their first crack at revenge in the 2000 season opener.

The Rebels got off to an early lead, but the Dingos were able to slow their momentum down. The Dingos began to control the play in the centre of the ground as the Rebels on-ballers began losing steam.

A big momentum shift occurred in the third quarter as the Dingos bench was able to breath new life into the squad. The fresh legs set the tone and the Dingos were able to turn that momentum into goals and take the lead into the 4th quarter.

In the 4th quarter, the Dingos were able to close out the 08.08 (56)-04.02 (26) victory over the Rebels. Chris Black led the way with 3 goals with Chris Cunning, Adam McMahon, Mark Woodruff, Peter Gordon, Ken Tovich, and Tim Moller combining for the rest of the points.

The victory ensured that the Dingos got their 2000 campiagn off to a terrific start and allowed the club to gather momentum heading forward in their quest for their first flag. Be sure to follow @TorontoDingosFC on your favourite social media network as we continue to look back on historic Dingos moments.