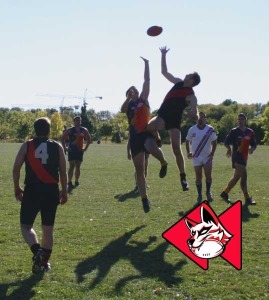 Since joining AFL Ontario in 1996, the Toronto Dingos have won four Premierships. Three of those flags came in consecutive years in 2003, 2004, and 2005. The 3-peat is a feat has not been replicated in AFL Ontario since the Dingos historic run in the early 2000s. The 2020 season marks the 15th anniversary of the final flag in the 3-peat.

This week marks another special anniversary as each season of the 3-peat began 17, 16, and 15 years ago this week. To honour the anniversary of when the Dingos kicked off each season in our dynastic reign, we are turning back the clock to revisit our Round 1 matchups in 2003, 2004, and 2005.

The opening round of the 2003 campaign was a rematch of the 2002 Grand Final. After falling to the Eagles in the Grand Final, the Dingos were out to exact a measure of revenge and get the new season off to a flying start.

New captain Craig Stewart led the charge with a solid performance picking up a goal (and by all accounts, could have had more). A new look forward line of Butch Buczkowski, Josh Sharp, and Stu Wallis put in a dominant performance that solidified a Dingos’ victory. The trio combined for 6 of the Dingos 10 goals in the match. Additionally, Bryan Wells added 2 goals of his own, with Danny McIlvray rounding out the goal scorers on the day.

The Dingos received stand out additional standout performances from Bob Clarke, Brolsey Gordon, and Paul Tinkler. After the match Tinkler said that “the win was a 100% team effort with all players and support staff contributing on the day.” The Dingos avenged their loss in the 2002 Grand Final with a convincing 10.10 (70)- 08.05 (53) victory.

The game was dedicated in honour of Mike Lazecki, who was tragically killed earlier in the year. The Dingos would also dedicate their Premiership in Lazecki’s honour.

Round 1, 2004: Dingos vs Etobicoke Kangaroos

Entering the 2004 campaign, the Dingos were coming off an undefeated season that saw them claim their 2nd Premiership! The quest to defend the title would begin with a rematch of the 2003 Grand Final against the Etobicoke Kangaroos.

The Dingos would get off to a strong start in the opening quarter as they jumped out to a two-goal lead. Exceptional on-ball work from Mike Butcher, Stuart Wallis, Brad Herd, and Craig Stewart would be the catalyst of the Dingos success early on.

The 2nd and 3rd quarters were not up to the standard that the Dingos had established during their undefeated run in 2003. However, the Dingos backline led by Paul Tinkler and Tim Shaw were outstanding and turned away many of Etobicoke’s scoring opportunities. Half forwards Mike Karas and Bryan Wells began setting up some opportunities for the Dingos in the later stages of the 3rd quarter.

The club’s veterans provided a rousing speech between the 3rd and 4th quarter. A few strategic changes proved dividends quickly as the Dingos added 3 goals in quick succession to pull away from Etobicoke. Wallis’ exceptional work rate on-ball earned him the Best on Ground honours on the day. Craig Stewart (2), Andrew Nisker, Nick Gallus, Bryan Wells, Mike Butcher, and Gavin Ingram provided the goals as the Dingos opened up the 2004 campaign right where they left off. Final score: Dingos 07.16 (58)- Etobicoke 03.01 (19).

Following back-to-back Premierships, the Dingos once again found themselves in a Grand Final rematch to open up the 2005 season. The Dingos and Eagles battled in tough, physical encounter. The Dingos’ skills were on full display early and they jumped out to a 02.04 (16)- 00.02 (2) lead after the opening quarter.

Halfback Mark MacDonald was in the midst of an outstanding game as he regularly two Eagles players to the ball in multiple 2-on-1 situations. Despite Macca’s efforts, the Eagles managed to put two goals on the board. The Dingos added one more of their own. After the opening half the two squads were only separated by a single goal. However, the tight contest was just heating up.

The Eagles looked to gain the upper hand in the 3rd quarter, but the efforts of rookie Cam Saylor ensured that they didn’t. Saylor impressed everyone at the ground in his debut. He was all over the Eagles full forward constantly punching the ball away at the contest and clearing the danger. Saylor’s efforts to constantly thwart the Eagles offense would pay dividends in the 4th quarter.

Butch Buczkowski would slot the game winning goal in the 4th quarter. After Butch’s goal, Andrew Nisker had his say on the defensive side of the pitch. He had a number of courageous marks that took away Eagles’ opportunities at critical moments of the match.

In the end Butch would lead the way with 3 goals with Tim Shaw, Mike Butcher, and Gavin Ingram each adding one of their own. The Dingos would walk off the pitch with a hard fought 06.09 (45)- 06.06 (42) victory. Following the match, Craig Stewart said “Congratulations to all Dingos. Let’s build on this start and continue to improve all year.”

The Dingos would indeed continue to improve, as they did in each of the previous two seasons. The hard-fought victories in round 1 would prove to be a sign of things to come for the Dingos. Ultimately, the winning start each year would pave the way for the Dingos’ second, third, and fourth flag!

Be sure to follow @TorontoDingosFC on your favourite social media network and stay tuned for future editions of Dingos Rewind!