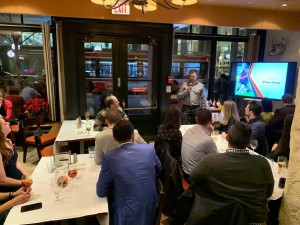 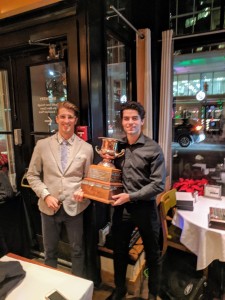 Wrapping up the 2019 footy season, over 40 Toronto Dingos players, wives, girlfriends, and alumni gathered this past Saturday for the club's annual Awards Night.  One of the last events of the calendar year, Awards Night is a chance to celebrate the achievements of the past season and honour those club members who made a difference both on and off the field.  For the second year in a row, the Dingos held their event at the fantastic Le Marche restaurant in downtown Toronto.
Hosted by MC Gary Conlon, the Dingos presented game milestone achievements as well as awards for Most Improved Player, Player's Player, Goakicker, Rookie, Steinberg (Clubman) and Stewart (Best & Fairest).
The final vote total for the Stewart award for Canadian player was one of the closest in history, with four players separated by only a few votes.  In the end, Greg Gilbert won his first Stewart Award - well deserved!  The full list of award winners is below.  Congratulations to all winners!
Game Milestones:
Michael Bocian (50 games)
Michael Ladd (50 games)
Rob McNaughton (50 games)
Goal-Kicking Award: Thomas Santibanez-Espinosa
Most Improved Player Award:  William Whyte
Steinberg Award:  Stephen Gordon
Coach's Award:  Francis Lacasse
Player's Player Award:  Greg Gilbert
Rookie of the Year Award:  James Bradley
Stewart Award (Canadian):  Greg Gilbert
Stewart Award (Australian):  Michael Ladd
The Dingos were also fortunate to have a legendary alum, Bryan Wells, on hand for the evening.  One of the top Canadians ever to wear the Red & Black, "Wellsy Sr". was a key part of the four flags won by the Dingos in the early 2000s and a previous winner of the Stewart Award. In the years since (thanks to his recruitment) both his brothers have donned the Red & Black and have continue playing for the Dingos through 2019.  Thanks for coming out, legend!
C'arn the Dingos!