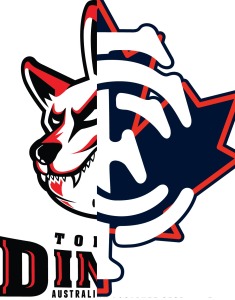 The Toronto Dingos finished off the 2019 footy season August 23rd with a clash against the Central Blues on a gorgeous Friday evening.  After a promising start to the season was halted by injuries and tough losses, the Dingos were looking to end the season on a high note.  To help them get over the finish line, a few veteran semi-retired Dingos pulled on the Red & Black jumpers for a kick, including Chris Buczkowski, Jake Steinberg, and Joe Carrig.

A tight back-and-forth contest in the first quarter started to tilt the Dingos' way in the second quarter.  Great work up front by Rob McNaughton and Steve Donnelly led to multiple goals for each player, while Michael Ladd ran amok in the midfield, making sure the footy was always flowing forward.
And after a tough first quarter, the back line anchored by Steve Gordon and Michael Bocian shut down the Blues, preventing any momentum and allowing the Dingos to run away with a 9-goal victory.
Huge thanks to Dave Wells for working as goal umpire and injured players such as Justin Powick and Mike Karas for coming and cheering on the lads.  A tough season but things are looking up for the 2020 campaign!
Score: Dingos 11.8.74
Blues 2.5.17
Goals:  Noddy (5), Donno (3), Laddy (2), Cosma
And congratulations to Michael Ladd and Thomas Santibanez-Espinosa, who were both named to their first All-Ontario teams for their tough work in the 2019 season!  C'arn the Dingos!