Toronto Dingos it around against High Park Demons 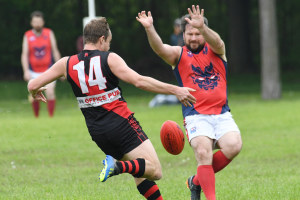 The Toronto Dingos came into Saturday’s Round 8 clash against the High Park Demons off the back of three straight losses to quality opponents and desperate for a win to turn things around. At the same time though High Park were coming into the match with some wind in their sails fresh off a win over the Toronto Eagles. The Dingos still remain in finals contention but will need every win they can get to make the numbers work.

Conditions on the day were dry and hot, with forecast rain holding off until all matches were well and truly completed. While the Dingos went down in the previous week to a dominant Rebels side, they were able to come out firing and make an impression in the opening stanza of that game. The Dingos were able to repeat this opening the game with 5 goals in the first quarter to make a statement about their intention for the match in what would ultimately prove to be their strongest quarter of the game.

Canadian ruckman Tom Bell made a welcome return for the Dingos and Michael Ladd, Dylan Marshall, and Dan Gunn made the most of his appearance dominating the centre clearances early. Up front recent addition Leigh Dowling was able to make the most of it, taking the field in his first cap as a Dingo and getting two goals for his trouble. Dingos veteran Yoni Moussadji also returned from a long term absence and added welcome experience to the line-up having played in the Dingos premiership teams. This was Yoni’s 99th fixture for the team and he looked like he never left. We can’t wait to see his 100th game in 2035!

The Dingos were able to continue to push in the second quarter, adding another four goals. While this meant the Dingos went into the halftime break with high spirits the first half did however the continuation of a rotten run of injuries for the Dingos. Fullback Tim “Fish Fingers” Indian took a boot to the hand while contesting a kick that resulted in a particularly nasty finger injury. Suffice to say the photo of this one that is circulating is not fit for publication.

The halftime break seemed to drag on for the Dingos, who were keen to get back on the field and keep their momentum going. Once play returned the Demons were able to show how quickly the tables can turn, piling on a number of goals and putting them firmly on the front foot. Playing four consistent quarters has been an issue for the Dingos all season and is something they will surely continue to focus on in coming weeks.

Just when it looked like the Demons might be a chance however the Dingos were able to get one back off a long Sean O’Reilly bomb into the forward 50. In the backline veterans Patrick Bossey and Mike Karas, well assisted by returning Canadian Justin Bell, were also able to steady the ship.

In the end despite not getting the second half they might have hoped for the Dingos were able to run away with this one 12.8-80 to 6.5-41 and live to fight another day. They will now turn their attention to another must win game as they head to Guelph to play the Grand River Gargoyles on July 27th.