New Blood leads the Charge as Dingos Defeat the Demons 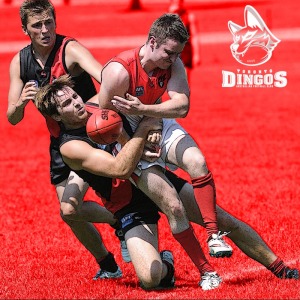 Saturday’s round two match against the High Park Demons was a much drier affair than round one with conditions perfect for footy at Colonel Samuel Smith Park despite a healthy layer of long grass underfoot.

The Dingos brought a packed out squad to the game opting to blood a raft of new rookies and offering the Demons some of our regular players in reserve to facilitate a full 18 a side hitout.  Right from the bounce the Dingo’s were hard at it, winning the ball cleanly through the middle and giving veteran player Gary ‘Gazza’ Conlon his first two goals of the season, but it wasn’t long until the Dingos found themselves on the back foot conceding two counter goals from a Demons side with a newfound resolve compared to recent seasons.

Some deft touches from rookie ruckman Francies LaCasse helped keep the Dingos ahead providing some penetrating runs from Michael Ladd feeding Stefan ‘Cosmic’ Cosma the ball which he calmly turned in to goals. A real battle was fought in the guts with Michael Beda, Geoff Hanson, Dylan Marshall and Eoghan Bergin linking up smartly to keep things moving in the right direction.

The Defense line, consisting of Ittaana Crow, Ben Moller, James Sharman, Devin Dutt and led by Captain Mike Bocian worked hard to keep a resurgent High Park at bay but were usurped by one of their own as Justin Bell, transferred to the Demons to supplement numbers, slotted in a cracking shot for his first Aussie rules goal, albeit against his own team.

But as the game wore on the Demons kept up constant pressure and continued to probe the Dingos defense. The points margin could have been much shorter if it wasn’t for Greg Gilbert producing a heroic Best On Ground performance cleaning up backline, shutting down a spirited Demons offence and punting the ball back into the fray.

A relentless Dingo attack was finally rewarded when first gamer Lawrence ‘Lazza’ D’Andrea showed some excellent instinctual movement to slink past the Demons defense to score two excellent goals for the Red and Black. Persistent attacking support work from Tom Bell and Thomas Espinosa opened up play outside the Dee’s 50 yard line creating the perfect opportunity for a Stephen ‘Donno’ Donnelly goal which capped off a hearty performance from the Irish man.

This was an excellent game for our first year players which saw some great performances by Derek Bressette, Devon Derry, Berni Melendez and Tristian Kinghorn.

The Dingos faceoff against The Central Blues Saturday June 8th at 10am.